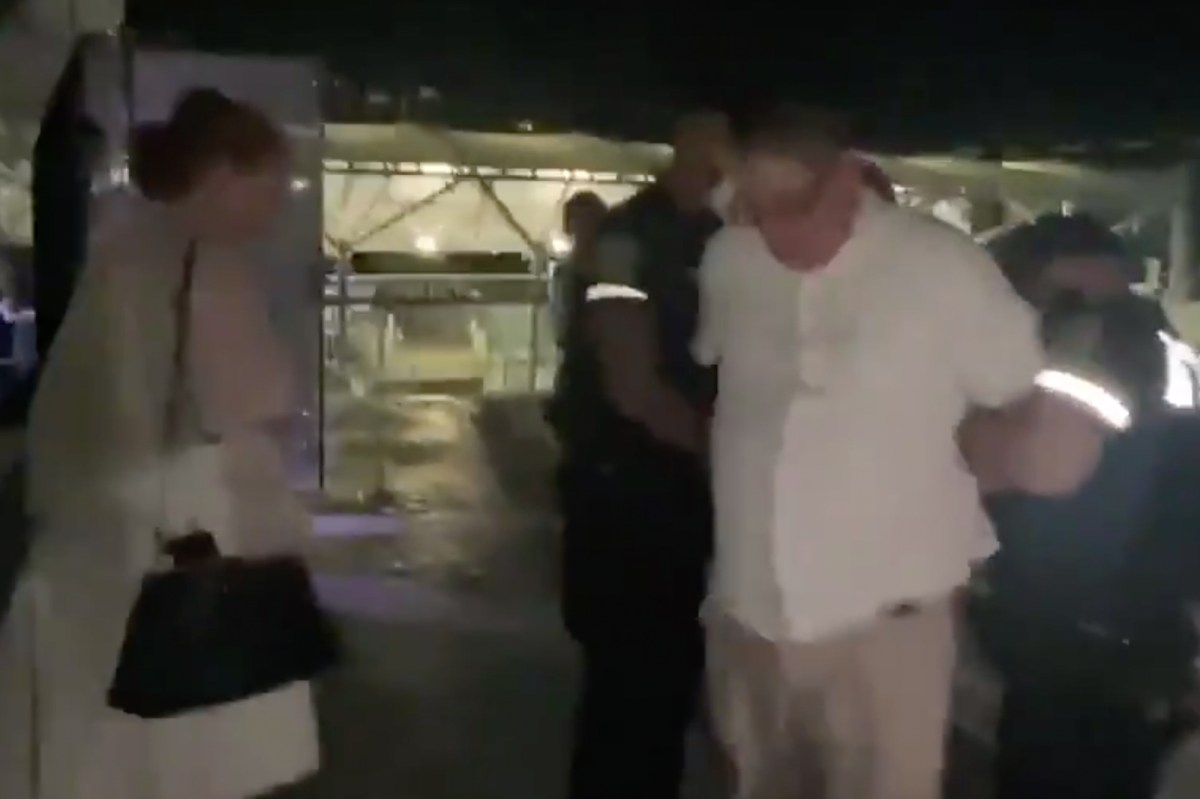 A Brooklyn couple was cuffed and hauled off a city ferry Saturday night after refusing to wear face masks — as other riders cheered their arrest, according to cops and video.

The middle-aged Bay Ridge pair spent 15 minutes on the NYC Ferry boat’s top deck arguing with workers over the captain’s order to put on a mask amid the pandemic when the vessel docked at Brooklyn Bridge Park around 8 p.m., Gothamist said, posting video of the encounter.

The angry couple — claiming they were being discriminated against because they are white — then went back and forth with two responding NYPD officers for another 45 minutes, while other riders shouted for them to get the boot so the ferry could continue on its way. There were 90 people aboard the vessel at the time, a source told The Post.

The woman, who was returning home with her husband after a night out in Manhattan — and urged the reporter to film the incident — told the site, “I’m just so fed up,” Gothamist reported.

“This has been going on since March, and my husband is f–king pissed off,” she said. “Every time I have to commute to Manhattan, it’s a f–king process.

“If we were f–king black, I can guarantee you that guy would never come out and tell us put a mask on.”

Her husband, who only gave his first name, David, added, “Right, because Black Lives Matter.’’

The couple claimed to cops at one point that they both had a medical condition that exempted them from Gov. Andrew Cuomo’s mandate that people wear masks when using public transportation.

The man added that the captain was “shaming us,’’ saying, “Because we can’t wear a mask, we’re being discriminated against.’’

The officers asked to see proof of the pair’s medical issues that might prevent them from wearing masks, but the couple refused.

“Take them off the boat! We gotta go!’’ a male passenger shouted during the confrontation.

The pair was finally handcuffed and escorted off the boat — to cheers and claps.

A police rep told The Post that the man and woman each received a summons for disorderly conduct.

“Mostly everyone complies [with the mask regulations]. And then you get a few knuckleheads who don’t,’’ a cop at the scene told Gothamist.

The woman told the site that she and her husband have already sued the MTA over being forced to wear masks on public buses and are considering suing the ferry service, also.

An NYC Ferry rep told The Post in an e-mail that the company “is continuing to investigate the incident in question.

“The safety of our riders and crew is our number one priority. We sincerely thank the NYPD for their rapid response to last night’s incident, and we greatly appreciate the professionalism of our crew along with the patience of our riders.”