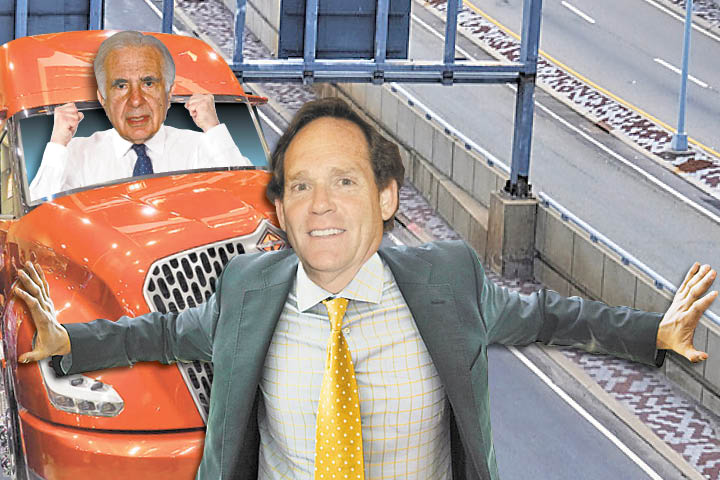 Carl Icahn has been squabbling with a former protégé in negotiations to sell a truck-making giant — and investors fret that the tiff could land the deal in a ditch.

The 84-year-old billionaire is squaring off against Mark Rachesky — a hard-charging financier who worked for him for six years in the 1990s — over the asking price for Navistar, which makes the International line of big rigs, as well as buses and military vehicles, sources told The Post.

Traton, a Volkswagen subsidiary that makes the German auover to giant’s trucks and buses, offered to buy Navistar in January for $35 a share, or $2.9 billion, in a deal that could enlarge VW’s share of the US truck market. Navistar shares surged more than 50 percent to above the asking price, and Navistar hired bankers in February to respond.

Not long after Traton made its offer, Rachesky, a large Navistar shareholder who controls a seat on the board, told some of Navistar’s directors that he wanted more than $70 a share, sources said. While other board members, including Icahn, agreed that Traton needed to sweeten its offer, they didn’t expect Traton to double it, sources said.

Talks were then stalled due to COVID-19, but Navistar’s board is now scrambling to align itself before discussions resume this month, sources said. Traton, which has seats on Navistar’s board, is Navistar’s biggest stockholder with a 17 percent stake. Icahn and Rachesky’s MHR Fund Management each hold stakes of roughly 16 percent.

It couldn’t immediately be learned what price Icahn wants, but sources close to the situation say it’s significantly lower than $70.

“Any speculation on MHR setting a price is reckless and completely false, and only serves to create unnecessary distraction and strife,” a Rachesky spokesman said in a statement, declining to comment specifically on whether Rachesky had floated the sky-high price to fellow directors.

Nevertheless, some investors worry that Rachesky could endanger the deal if he continues to hold out. That’s despite the fact that Navistar’s stock has lately bounced from a COVID hit that brought it near $15 in March and April, closing at $37.35 on Friday.

“Navistar was not worth what Rachesky was asking for,” one source close to Navistar fumed.

“Maybe if Mark had said $55 to the other directors . . . a deal could have been had before the pandemic.”

Another source put it more bluntly: “The rest of the board is not in love with Mark.”

A Stanford-trained medical doctor before he embarked on an investing career, Rachesky has done well for himself since branching out on his own. In 2012, he and his wife, Jill, paid $33 million for a swanky apartment at 834 Fifth Ave. with four fireplaces and 7¹/₂ baths, according to Forbes.

But critics say his lofty demands have gotten in the way of deals before.

His second-biggest holding next to Navistar is a 58 percent stake in Loral, a satellite company he has controlled since 2005. In 2015, the Ontario Teachers’ Pension Plan had a handshake deal with Loral to buy it for $7 billion, or $85 a share, The Post reported at the time.

And as chairman of Loral, Rachesky walked away, apparently after not getting a desired $300 million fee, The Post reported. The shares are presently trading at $23.13. While Loral has been consistently paying dividends since, they don’t come close to offsetting the lost, fourfold premium.

And his performance has lagged in recent years. In 2007, MHR raised a $3.5 billion fund that Forbes said was generating a 13 percent annual return. At the end of last year, that return had fallen to 5.1 percent, according to the Oregon Employees Retirement Fund. That places it in the lowest 25 percent of buyout funds raised at that time, according to Cambridge.

Rachesky last raised a fund in 2016 that closed on $2.3 billion. That fund has generated only a 1 percent annual return as of Dec. 31, according to the Oregon pension.

“Mark is one of the smartest, most strategic and disciplined investors I’ve ever met,” Young told The Post. “The record shows that when he realizes investments, he makes fortunes for his limited partners.”
Navistar, meanwhile, faces growing skepticism from analysts about its chances for a lucrative buyout.

“Based on Traton’s history with buyout situations, we doubt it will raise its bid or that any competing proposal will emerge, especially given Navistar’s levered balance sheet and currently anemic demand for commercial vehicles,” BMO Capital Markets said in a June 4 report.