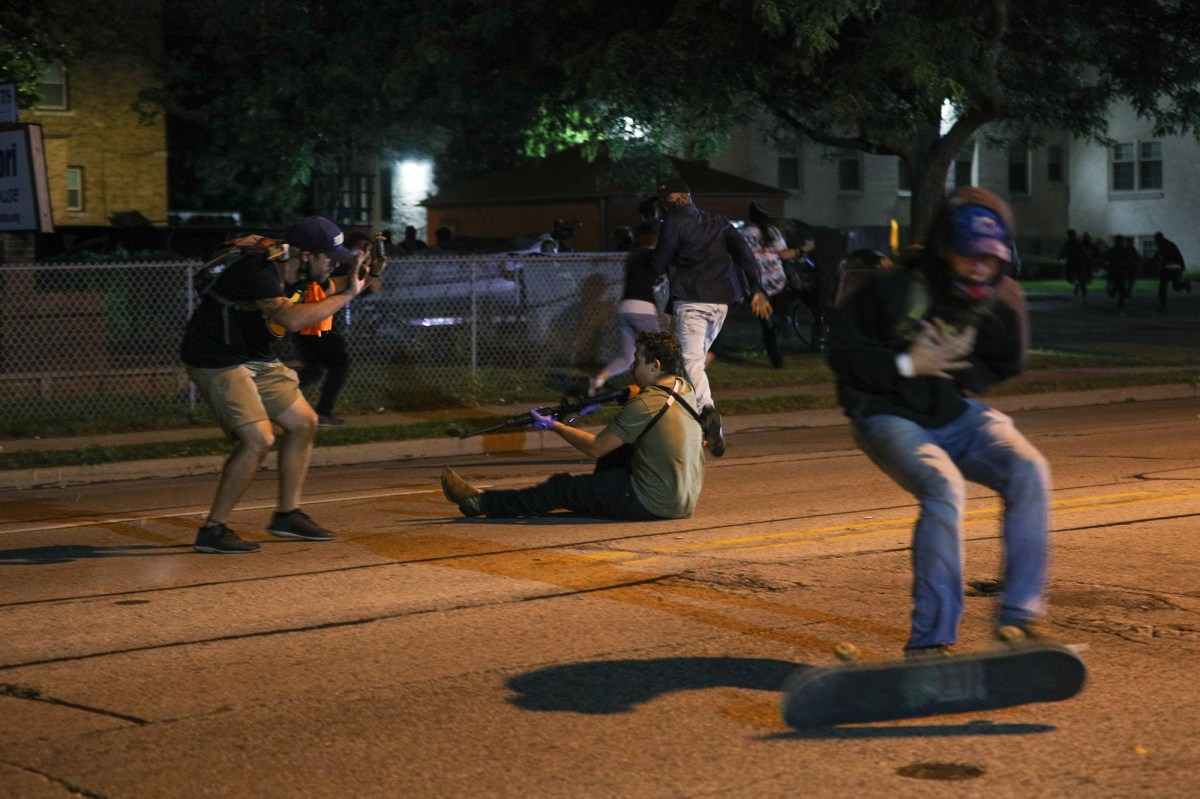 Harrowing photos show the moment a skateboarder took a bullet to the chest at close range during a violent night of unrest in Kenosha, Wisconsin.

A photographer caught the chaotic seconds before and after a gunman with a long rifle fired off shots at rioters in the middle of a street Tuesday night — killing at least two and injuring another.

The series of photos showed one of the fatal victims — a man wearing blue jeans, a hooded sweatshirt, a mask and baseball cap and carrying a skateboard — running up to the gunman after he fell to the ground.

The victim appeared to make a grab for the suspect’s weapon seconds before he was apparently shot in the chest and fell onto the pavement.

Disturbing video taken from the opposite side of the street also showed the wild scene unfolding — rioters sprinting down the empty street and at least one man appearing to kick the gunman on the ground before fleeing.

That’s when the man with the skateboard intervened — with the recording showing the gunman shooting him at close range as the victim tried to snatch the weapon away and then scrambled to pick up his dropped skateboard.

Reporters at the scene said the deadly shootings were sparked by a confrontation between rioters and the gunman, who was protecting a car dealership when he first opened fire. He was not in custody as of Wednesday morning.

Two men died — one who was shot in the head and the man with the skateboard, who was shot in the chest, Kenosha police said early Wednesday, the Milwaukee Journal Sentinel reported. A third man, later discovered with a gunshot wound to the arm, suffered non-life-threatening injuries.

Riots have ravaged the southern Wisconsin city since the police shooting of Jacob Blake, a black father of six, on Sunday. Blake, 29, survived but is paralyzed from the waist down, his family’s lawyer has said.

The police officers involved in his shooting have not been identified.