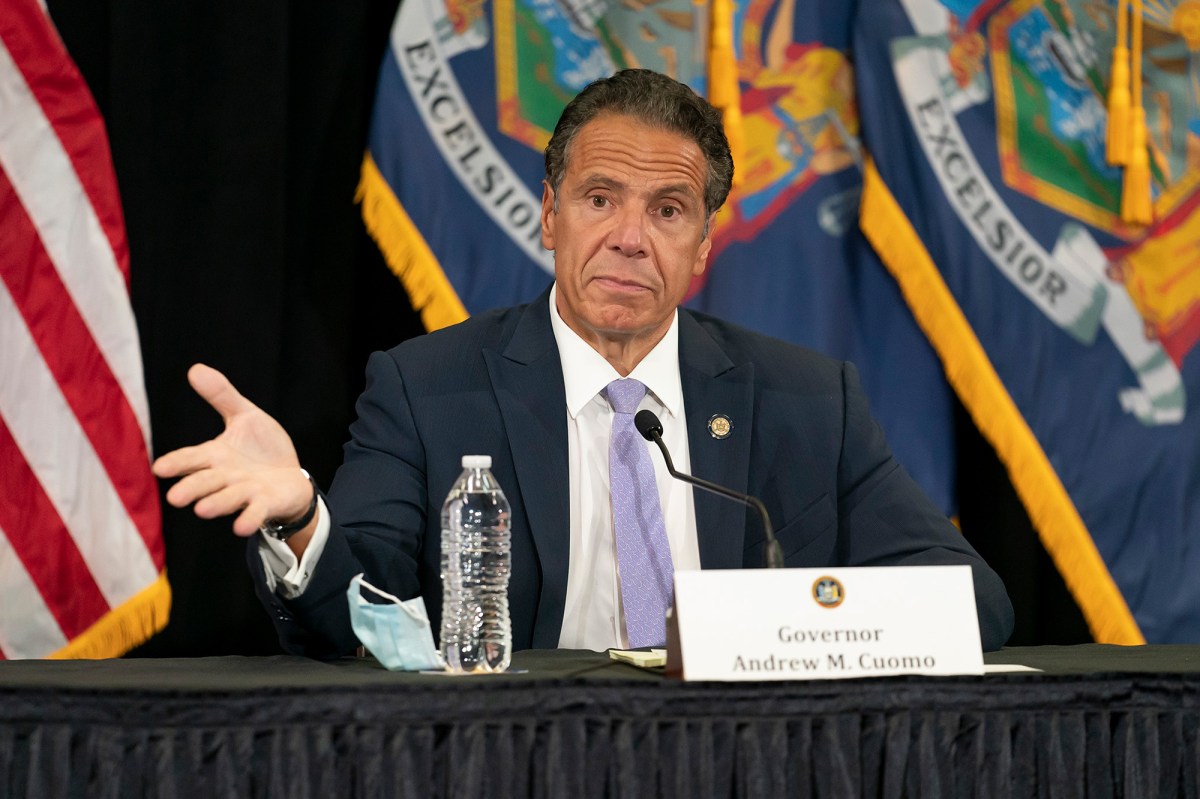 Cuomo acknowledged that his position put hard-hit Big Apple eateries at a “competitive disadvantage” with their rivals in the Garden State.

“I understand that people can go through the tunnel, go over the George Washington Bridge and go to a restaurant in New Jersey, where they can’t do that in New York City,” he said during a virtual news conference from Albany.

But Cuomo said the risk of a second wave of coronavirus cases — combined with the looming flu season — meant he wouldn’t budge on outdoor dining only, even though restaurants in surrounding Westchester, Long Island and upstate have been allowed to operate at 50 percent capacity since June.

“I want as much economic activity as possible. We also want to make sure the infection rate stays under control. That is the tension,” he said.

De Blasio — who last week described restaurant dining as “obviously a very optional activity” — predicted nothing would change until there’s some “huge step forward” in stemming the virus, possibly in the form of “a vaccine in the spring that will allow us to get more back to normal.”

“Is there a way where we can do something safely with indoor dining? So far, we have not had that moment, honestly,” he said.

Meanwhile, Cuomo’s budget director, Rob Mujica, said there was “no specific metric” on what needed to happen.

Mujica said officials were “trying to come up with guidelines” but faced problems because the city’s restaurants and bars “are licensed together.”

Andrew Rigie of the NYC Hospitality Alliance rejected the notion that both types of businesses had to all reopen at the same time.

“There’s more than 25,000 eating and drinking establishments in the city of New York, and approximately half of them don’t have liquor licenses — because they don’t serve alcohol,” he said.

“So if their concern is alcohol, then immediately open the restaurants that don’t have liquor licenses.”

Raymond Lau, manager of the Dim Sum Palace on Manhattan’s famed “Restaurant Row,” said, “It would be unbelievable to wait for a vaccine.”

“With winter coming, it’s so hard to dine outdoors. Right now, we are surviving, but if they are going to defer the indoor dining, we can survive only three or four months,” he said.

Elias N., co-owner of the Galaxy Diner in Hell’s Kitchen, said that although the restaurant can serve 65 people inside, there are only 15 seats outside and “it only fills up on Saturday and Sunday.”

“After October, no one will sit outside,” he said.

“As a human being, this is very bad. Even now I am afraid to pick up a plate even with gloves. I am an old guy. I am ready to retire and go to the Greek Islands.”

In Brooklyn, Travel Bar co-owner Mike Vacheresse, said, “We were able to pay half rent from April through July, but now we have to repay that money.”

“Without a break in rent, and with winter coming, I don’t know how we will continue. We are probably doing 20 percent of our sales right now,” he said.

“And the thing is that the public perception now is that we are doing fine because we have five tables up front with people sitting at them, but that is a fraction of what we do.”

Megan Rickerson, 34, owner of the Someday Bar on Atlantic Avenue, said, “I can’t pay rent. I can’t pay my staff. I can last a couple months, maybe three.”

“Outdoor dining is not a savior by any means,” she said.

“Between drug use and homeless people harassing customers, customers don’t want to wait to dine outside. And there are cars flying by at 40 mph.”