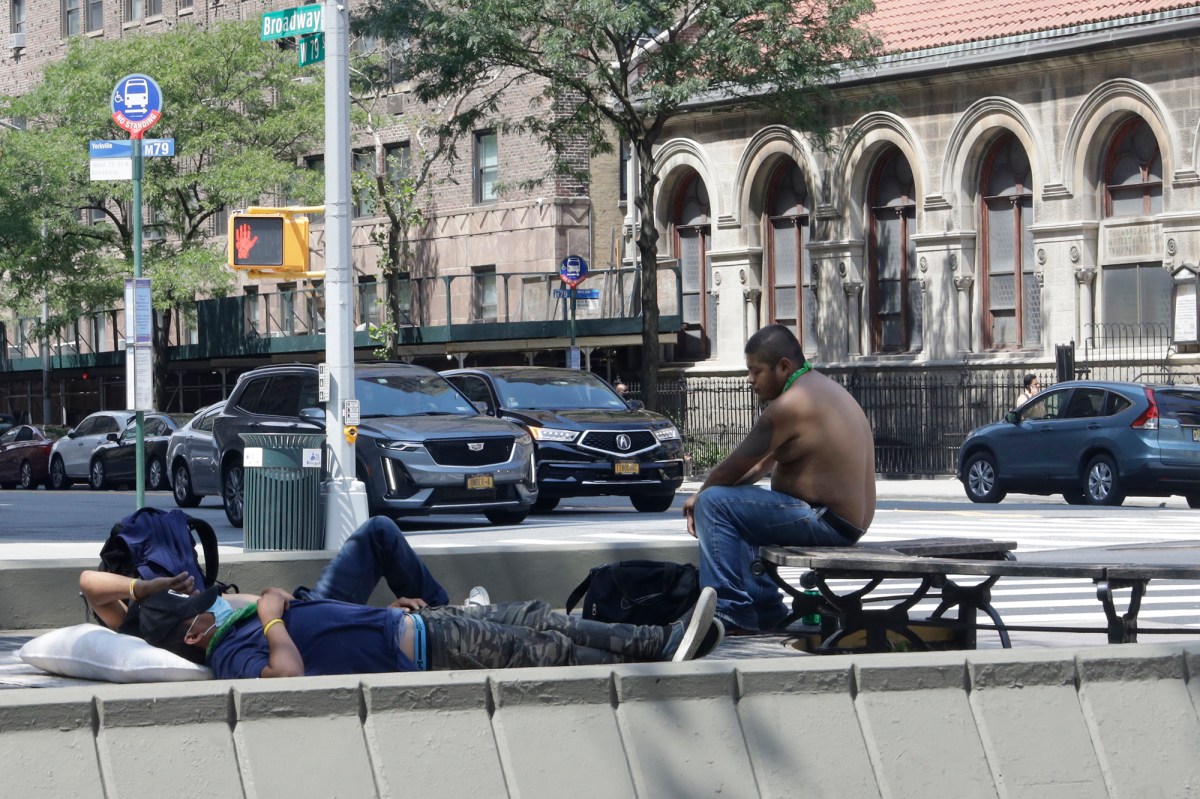 Upper West Side restaurateurs struggling to survive COVID say the city did them no favor by moving hundreds of homeless men dealing with drug addiction into the neighborhood just as outdoor dining was getting underway.

Now, in addition to making sure customers and staff are happy and safe, eatery owners also have to worry about diners being accosted or harassed as they eat. It’s driving business away and the city has done little to help, they say.

Marjanne Motamedi recalled the night a homeless man walked up to a display table at her eatery, Cibo e Vino, grabbed a bottle of wine and threatened to smash it into a diner’s face. A restaurant worker intervened, and the homeless man left with the bottle, Motamedi said.

On another night, a homeless man walked by the restaurant’s diners swearing obscenities and spitting, she said.

“We’ve had a few unpleasant situations, where homeless people will verbally attack and even try to spit at our customers and there’s nothing you can do,” Motamedi said of the Italian eatery she co-owns on Broadway and 89th Street. “We tried to reason with them but there is no point as they are either not present mentally or on something, and the police say it’s out of their jurisdiction,” she said.

Like other restaurateurs interviewed by Side Dish, Motamedi made a point of saying that she is sympathetic to the homeless population and that Cibo e Vino often donates food to them. But she and others also fear that their only hope for surviving the pandemic — outdoor dining  — has been put at risk by the city’s decision to move men from homeless shelters known for catering to substance abusers to three tony UWS hotels owned by two supporters of Mayor de Blasio.

The three hotels at issue — the Lucerne, the Belleclaire and the Bellnord — are contracted to house the homeless until the end of October, which also happens to be when the city’s program to lend restaurants the city’s street and sidewalk space ends.

“This was not well thought out,” said a community board member who asked not to be identified. “The city should have placed families who could benefit from the schools here, not homeless men who are bringing their drug dealers into the neighborhood. We are sympathetic to the displaced population but they are not getting the services they need and they are hurting businesses that are already struggling to survive.”

“Our guests tell us that they can’t eat in the cafe anymore,” lamented Jeremy Wladis of his Brad’s Burgers & BBQ on 85th and Columbus Ave., where a homeless man camped out across the street “threatens, swears and harasses every human who walks by.”

Wladis — president of The Restaurant Group, which has ten restaurants including Good Enough to Eat, Harvest Kitchen and Brad’s Burgers —  tried to fix the problem by adding planters, he said. When that failed to drown out the obscenities, he installed three 40-inch flat screen TVs to keep his customers “distracted,” he said.

“There are limitations on what you can do,” he said. “You can still hear people scream.”

Larry Bellone, managing partner and owner of Mediterranean eateries Tessa and Asset, says he now finds hypodermic needles in the planters he installed to beautify his restaurants and separate them from the cars and the streets.

“The new homeless people from the hotels are more aggressive. They aren’t just harassing diners, they are also threatening them. It is discomforting.”

“I live in the neighborhood and I can feel the difference,” Bellone said.  “In just a few short weeks, there are more homeless people and garbage has piled up on the streets. It feels more uncomfortable and less safe. I think that people are more on edge,” Bellone said.

Linda Alexander, a publicist and longtime resident of the community who also serves on the community board, said she has been harassed by homeless men who weren’t wearing masks while she was dining, which also put her at greater risk for COVID. “It was uncomfortable. I didn’t feel safe,” she said.

But in typical New York fashion, other residents say they are OK with the change of scenery —  for now.

“It feels very Parisienne,” said one resident of the new outdoor dining scene — despite a recent incident in which a homeless person knocked a cell phone out of her friend’s hand for no apparent reason.