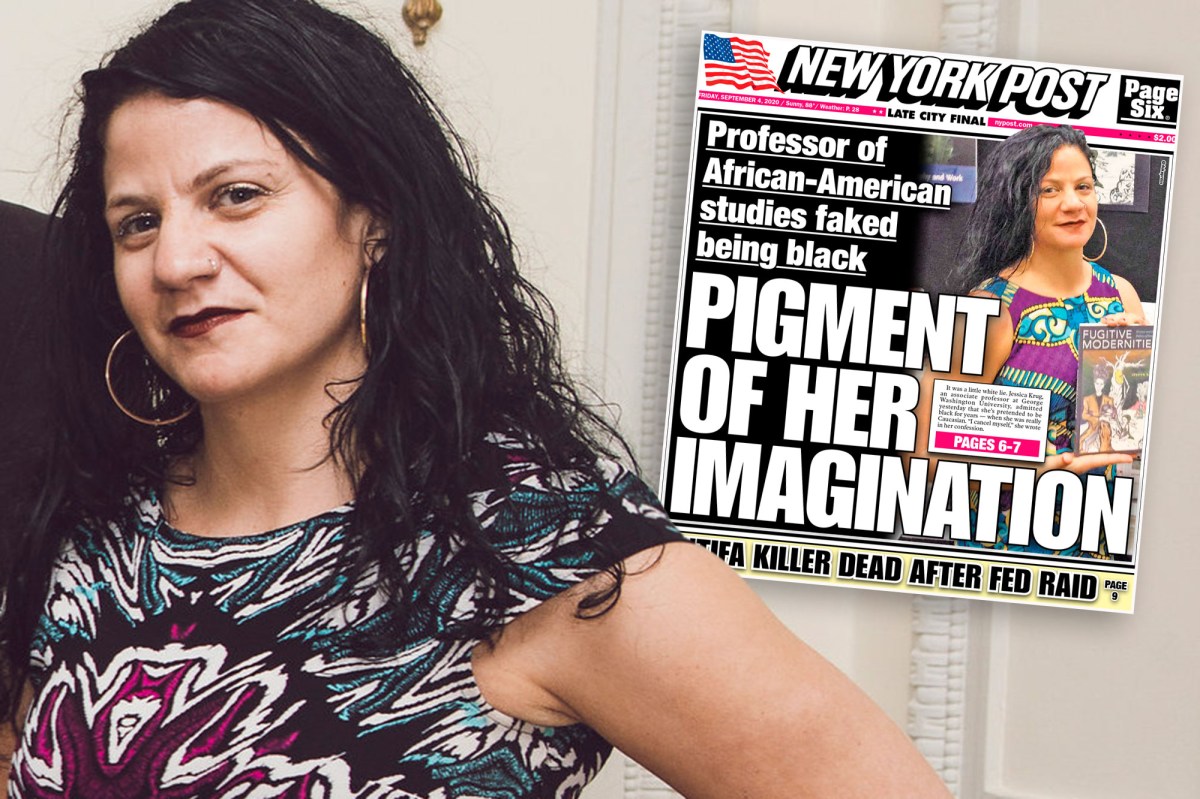 “I said hi to her one day and she said ‘stupid white bitch’ or something,” the woman, a friend of one of Krug’s neighbors in East Harlem, told The Post Friday.

The friend, who declined to give her name, was confused by the remark and chalked it up to a “chip on her shoulder.”

Krug, 38, exposed herself as 2020’s Rachel Dolezal in a viral Medium post Thursday, where she confessed to pretending to be a black woman for years.

“To an escalating degree over my adult life, I have eschewed my lived experience as a white Jewish child in suburban Kansas City under various assumed identities within a Blackness that I had no right to claim: first North African Blackness, then US rooted Blackness, then Caribbean rooted Bronx Blackness,” Krug wrote in the post titled “The Truth, and the Anti-Black Violence of My Lies.”

“I have built my life on a violent anti-Black lie, and I have lied in every breath I have taken.”

The associate professor and self-proclaimed “historian of politics, ideas, and cultural practices in Africa and the African Diaspora” is reminiscent of Dolezal, the white NAACP leader from Washington who was exposed for pretending to be black in 2015.

Neighbors at Krug’s East Harlem apartment building were confused about her ethnicity with one claiming she believed her to be of Latin American descent.

“She keeps to herself. She preferred to be in the company of African Americans,” he continued without elaborating.

Another neighbor, Anna Anderson, told the Daily Mail Krug called her “white trash” and said she was “gentrifying” the neighborhood by going running, the outlet reported. She also tried to claim the issues people of color face during confrontations with police.

“Do you know what the police do to black people like me?” Krug allegedly told Anderson after a confrontation over their bikes, the outlet reported.

“She called me white trash, which is ironic,” Anderson continued.

It has also been revealed that Krug was a privileged white kid from Kansas City who attended the private Barstow School, which currently charges between $15,000 and $22,000 for tuition, according to the Daily Mail report.

At the time, Krug was open about her white Jewish heritage but was “very political” and once planned a flag burning at the high school and even boycotted the prom, a friend told the outlet.

Repeated attempts by The Post to reach Krug have gone unanswered.