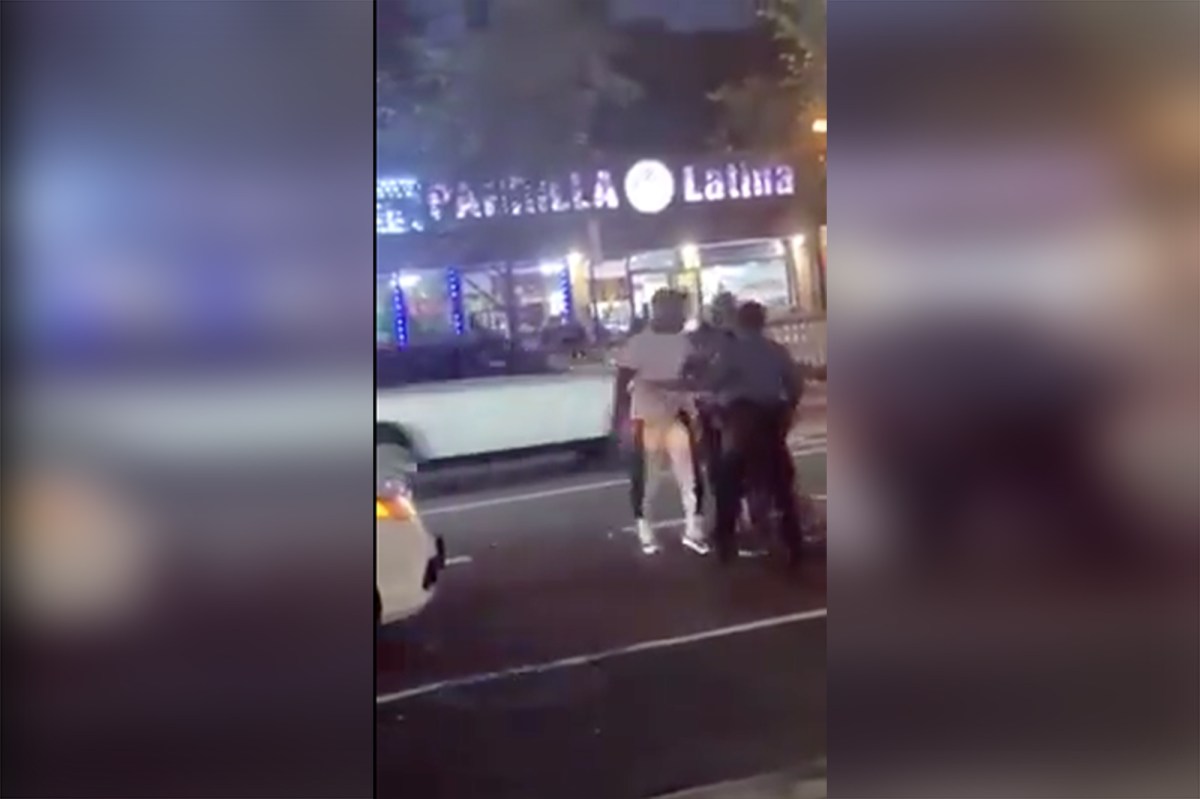 An “irate” driver went from 0 to 60 in just seconds this week in the Bronx, attacking a pair of unarmed NYPD traffic agents when they asked him to move his car away from a fire hydrant, according to police and footage of the incident.

Disturbing video posted to Twitter shows the melee moments before it unfolded, as the chiseled driver squabbles with the two brave, but smaller-in-stature agents in the middle of Fordham Road in Fordham Manor on Wednesday at around 8 p.m.

The agents Adams Mandiata and partner Edwyn Stuart, had driven up to the illegally parked car to confront the unidentified man, who was standing in front of a 2008 Silver Nissan Altima.

“He said ‘What the f–k you guys here for?’ ” Mandiata recalled.

When told they wanted him to move, the man grew even more enraged, and tried to take a swing at Stuart inside the agents’ car, he said.

Both agents then got out of their car, and the attacker went right for Mandiata — who, at 5 feet 6 inches tall is the more diminutive of the two traffic cops.

“I was backing up, backing up. He just punched my left eye so hard,” Mandiata said. “I feel down. I couldn’t see anything.”

Mandiata said his eye is still red and swollen.

The video shows Stuart, 35, going after the driver who, at one point, shoved him to his knees.

Stuart said he sprained his ankle — which was still sore Saturday — when he was knocked down grappling with the buff assailant.

The driver got in his car and took off but not before ripping the temporary New Jersey license plate off the rear.

But he apparently wasn’t done, the cops said.

He stopped the car, got out and attempted to fight the cops again, Stuart said. “He ran and tried to punch me,” he said. “I dodged the punch. We tussled a little bit more.”

Witnesses were stunned by intensity of the wild brawl.

“He was instigating all the fighting. He was really violent,” said Yvette Izavuirre, the owner of nearby La Perilla Latina restaurant. “I was just like this is crazy. What can make this guy just actually go on and hit the meter guys? If you got a ticket just accept it, don’t break out and hit somebody, because he’s just doing his job.”

Stuart, an 11-year veteran, said such violence comes along with the job.

“This happens to traffic agents on the regular,” he said. “Our job is a dangerous job.”

But the state’s bail reform law has made it even more dangerous, by giving the lawbreakers a sense of entitlement, both men said.

The reforms, which took effect this year, limited the number of crimes for which bail could be set.

He said he and his partner had to call for police earlier this year when they got into a confrontation with an angry motorist who had a knife.

Sokunbi Olufemi, executive vice president of Local 1182 of the Communications Workers of America, which represents the city’s traffic agents, said members of the force they are “soft targets for these thugs because we have nothing to defend ourselves.”

Agents should be able to carry pepper spray and batons to defend themselves, he added.

Meanwhile, another recent video posted to social media showed an unidentified man grabbing the ticket writing machine from an agent and refusing to return it.

And Olufemi said there was a scuffle Friday in Manhattan’s Diamond District when an agent confronted a driver over a double-parked car and punches were thrown.

“Assault on traffic agents is very common, but now it’s a daily occurrence,” Olufemi said. “The situation is getting worse daily since the city council handicapped the cops with the stupid laws (that) favor the criminals. Who can we go to for help? Police officers? They’re seeking … help too, nobody is listening to them.”

Mandiata, who has been on the job for three years, said it might already be time to call it quits.

“You never know what is going to happen again,” he said. “You might lose your life.”

No arrests have been made in Wednesday’s incident. The NYPD asked anyone with information to call 1-800-577-TIPS (8477).