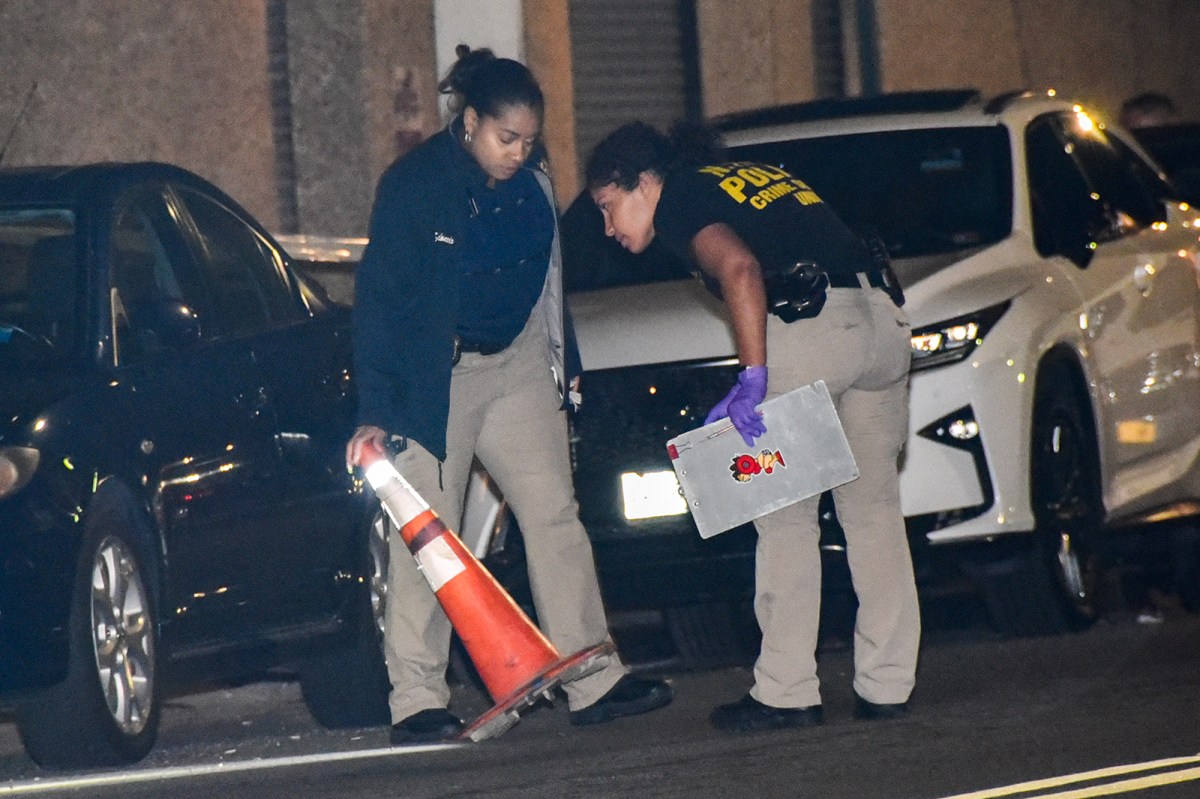 Five people were shot in the Big Apple on Sunday — including a man killed while sitting next to his wife in a car in Queens — as gun violence continued to plague the city, police said.

A woman called police around 12:50 a.m. and said her husband was shot near 23-33 College Point Blvd, police sources said.

Police who arrived at the scene in College Point found a 25-year-old man in the passenger seat of a Nissan Rogue with a bullet wound to the head and chest and a woman seated next to him, cops said.

EMS pronounced the male dead on scene. Two men ran from the scene on foot.

“I was in my room getting ready for bed and I heard this loud banging coming from down the street,” neighborhood resident Paula Munez, 19, said.

“I just thought it was firecrackers because it’s the holiday weekend, but then I heard somebody scream,” Munez said. “Pretty soon I heard police sirens and then the whole street was lit up with police lights.”

Shortly after 2 a.m., police said another man was shot and wounded during a dispute outside a home in an upscale Queens neighborhood.

The shooting on Powell’s Cove Boulevard in Beechhurst came after a birthday party at the home — although the homeowner said she did not know the victim and said the incident was not linked to that party.

“Things were dying down, things were getting quiet,” said the woman, who asked not to be identified. “And that’s when I heard a bang. I knew it was a gunshot.”

She said revelers from her bash and another party in the neighborhood had both spilled out into the street before the shooting.

The 23-year-old victim was rushed to Booth Memorial Hospital with a single gunshot wound. He was expected to survive, police said.

A few hours later in Brooklyn, a man was blasted in the chest in the rear of 478 E. 96th Street, cops said.

The 40-year-old was in a large group when he was shot around 5 a.m. He was taken to Brookdale University Hospital Medical Center in critical condition.

Police sources said the shooting happened outside a party at the scene.

Residents at the address denied any knowledge of the shooting later in the day — but one man said there has been an ongoing party there for some time.

“We’ve been having this party for two weeks,” said the man, who declined to give his name. “This weekend is big. There will be a lot more people here later.”

About an hour later, a man was shot in the hand about while he struggled with a gunman wearing a black mask at Blake Avenue and Amboy Street in the same borough, cops said. He was also taken to Brookdale University Hospital Medical Center.

Police said another shooting took place at 1:30 p.m. Details were not immediately available.

The Labor Day Weekend violence continued the Summer spike in shootings. There were 242 shootings recorded in August, up from 91 last year, policed figures show.