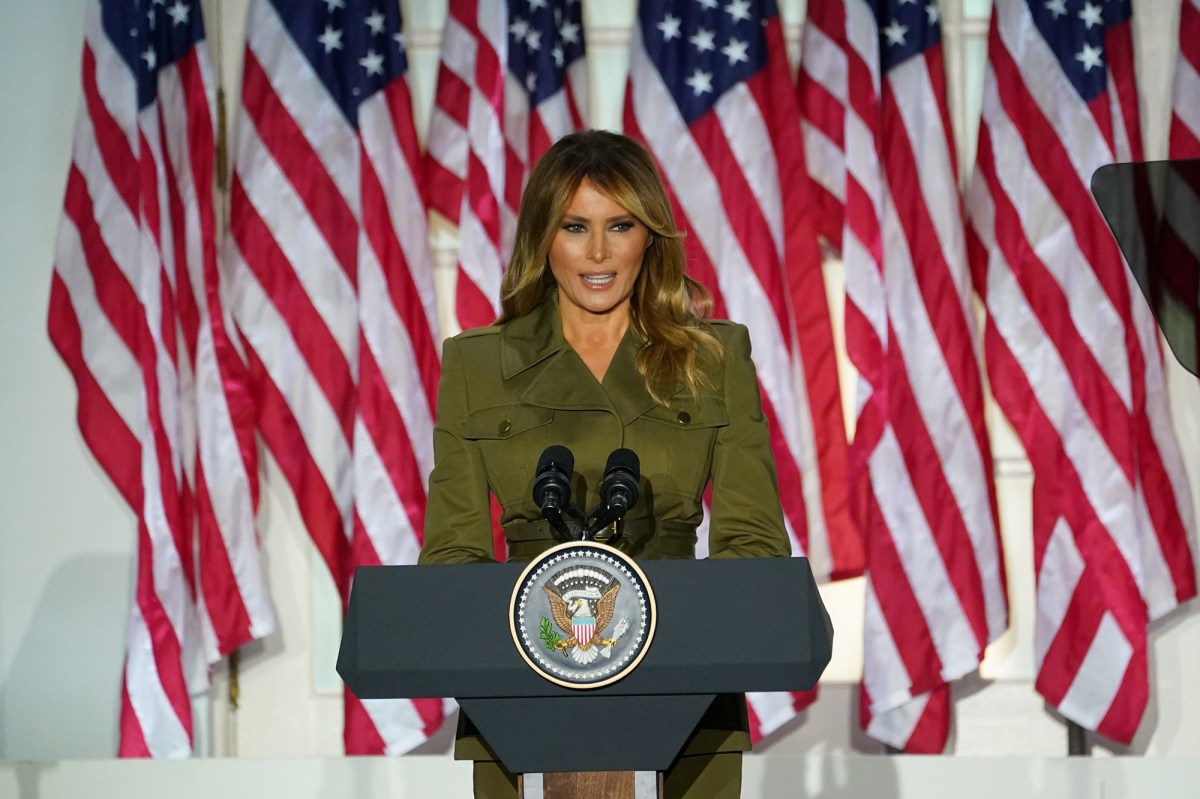 First lady Melania Trump on Tuesday urged voters to support her husband President Trump’s re-election and offered words of comfort for coronavirus pandemic victims during an address from the Rose Garden.

“It has been inspiring to see what the people of our great nation will do for one another, especially when we are our most fragile,” she said in a speech from the recently renovated Rose Garden during the second night of the Republican National Convention.

“I want to acknowledge the fact that since March our lives changed drastically. The invisible enemy COVID-19 swept across our beautiful country and impacted all of us. My deepest sympathy goes out to everyone who has lost a loved one,” she said.

“I know many people are anxious. Some feel helpless. I want you to know you’re not alone. My husband’s administration will not stop fighting until there is an effective treatment or vaccine available to everyone …

“I have been moved by the way Americans have come together in such an unfamiliar and often frightening situation. It is in times like this, that we will look back and tell our grandchildren the true kindness and compassion, strength and determination we were able to restore the promise of our future.”

The first lady spoke after a montage of media clips praising her performance as first lady. Beaming, she strode down the Colonnade toward the podium near the Oval Office to applause. President Trump and Vice President Mike Pence were among the audience.

Melania Trump, 50, was born in Yugoslavia and moved to New York in the 1990s to work as a fashion model. Her first language is Slovenian.

“As a young child in Slovenia, which was under communist rule at the time. I always heard about an amazing place called America, a land that stood for freedom and opportunity. As I grew older, it became my goal to move to the United States, and follow my dream, working in the fashion industry,” she said.

“After 10 years of paperwork and patience. I studied for the test in 2006 and became an American citizen. It is still one of the proudest moments in my life.”

Her speech reflected on recent racial unrest following the May killing of George Floyd by Minnesota police, recounting her travels in Africa, where she learned about the trans-Atlantic slave trade. She called on protesters to “stop the violence and looting being done in the name of justice” and people to “never make assumptions based on the color of a person’s skin.”

Melania Trump also praised her husband, saying that “for many years, I watched him grow concerned and frustrated. And I’m so proud to see the many things he has done in such a short time.”

“No matter the amount of negative or false media headlines, or attacks from the other side. Donald Trump has not and will not lose focus on you,” she said.

As first lady, Melania Trump’s signature social initiative is the “Be Best” anti-bullying campaign that urges children to be kind to one another online — a message that sometimes appears at odds with the president’s tweets against his detractors and foes.

“In my next four years as first lady, I will continue to build upon Be Best and work with individuals to pass legislation to take care of our most vulnerable,” she said.

She defended her husband’s trademark bluntness.

“Total honesty is what we as citizens deserve from our president. Whether you like it or not, you always know what he’s thinking,” she said. “And that is because he’s an authentic person who loves this country and its people and wants to continue to make it better.”

In addition to her role returning the Rose Garden to its 1962 Kennedy-era layout — featuring a stone pathway and refreshed rose beds — Melania Trump in March unveiled plans for a new tennis pavilion off the more secluded East Wing that hosts her office.

Melania Trump’s chief of staff Stephanie Grisham told MSNBC on Tuesday that “every word in this speech is from her. It’s very authentic and it’s going to come from the heart.”

In 2016, a campaign staffer apologized after portions of Melania Trump’s speech to the Republican convention in Cleveland were lifted from a Michelle Obama speech.

Grisham said a small Rose Garden audience for the first lady would include a small number of family members, friends, “Be Best” associates and some officials — all of them first tested for COVID-19.

The speech follows a report Monday that a former friend of Melania Trump, Stephanie Winston Wolkoff, secretly recorded the first lady criticizing her husband. Wolkoff, whose event planning firm received $26 million for work on the Trump inauguration, reportedly is writing a tell-all book. “It’s really unfortunate to take advantage of somebody trust like that while being a friend,” Grisham said Tuesday.