His mother loves him, but teenaged gangbanger Micah Belton is so dangerous even she wants him in jail.

The 18-year-old is finally in custody at Rikers Island on three counts of 2nd-degree attempted murder in five separate shootings, an alleged spree that cops said began when he was 17 last year and involved bullets flying into kitchens and car windows. His mom and police believe he’d be in far less trouble now if only the law and judges had put him away the first time.

“I’d rather him be in jail than for me to have to bury him,” Lillie Reynolds, 52, told the Post at her home at the former Edgemere Houses project in crime-ravaged Far Rockaway, where shootings are up 333% this year. Reynolds, the mother of nine, says the gang shootings in Far Rockaway are so bad that even her daughter and older son have been caught in the crossfire over the years.

“Micah needs to do a little time so he can realize life is really precious,” she said.  “All these young boys are dying around here. They’re dropping like flies. Everyone’s afraid to go outside.”

She added that while she’s not convinced he’s guilty of every charge, her son — an “enforcer” for the SOS (Shoot on Sight) subset of the Bloods gang, cops say — might have been scared straight had he faced harsher justice in the beginning.

She, cops and prosecutors say the system failed Belton.

“Micah is an example of what’s becoming the norm in New York City,” lamented Sgt. Courtney Cummings, a 20-year-veteran in the 101st Precinct. “He’s out because of a miscarriage of justice. The new criminal justice laws are failing the city of New York. They failed Micah Belton.”

She was referring to bail reform laws and the Raise the Age law, which increased the age of criminal responsibility to 18 and steered 16- and 17-year-old offenders from Rikers to the juvenile justice system.

Belton’s alleged gunplay began on May 27, 2019 at around 7 p.m. when police responded to a report of shots fired in Far Rockaway at Beach 54 Street. Officers found shell casings at the scene which were believed to be the aftermath of a shootout between warring Bloods and Crips.

In August, Belton plea-bargained his attempted-murder charge down to gun possession. Rather than being sent to Rikers, he was placed in a juvenile “diversion program” called Bronx Connect — over the objections of Queens prosecutors — by Judge Lenora Gerald, a source close to the Queens DA’s office said. Program participants are not locked up, but are supposed to check in by phone daily and in person weekly and follow a program that involves education classes, career counseling and anti-drug initiatives.

Just nine days later, on August 21 at 2 a.m., cops responded to what was believed to be a gang-motivated shooting, this one on the Far Rockaway boardwalk. The next day Belton was arrested for criminal possession of a weapon.

This time Belton was sent to Crossroads, a  juvenile detention center in Brooklyn. But in January, following a spate of letters from Crossroads staffers raving about his  success in the program, Judge Gerald gave him another chance — releasing him again to Bronx Connect, and its affiliated Manhattan Connect.

He was assigned housing in Manhattan and the Bronx, and told to stay away from Far Rockaway. He continued his daily program and did well, his Manhattan Connect caseworker told the Post. Unbeknownst to her, though, Micah apparently couldn’t resist the lure of home.

By summer he was back in the former Edgemere Houses, now called Ocean Bay, one of six low-income apartment buildings jammed into a grim, run-down stretch of the Rockaway peninsula near the end of the A-train line. Residents of the isolated, Gaza Strip-like neighborhood call it the “sixth borough.” Cops call the 101st Precinct the “7-3 by the sea” because it’s as dangerous as the 73rd Precinct in Brownsville, Brooklyn.

Here, Crips and Bloods rule over the streets and courtyards in tiny, dueling fiefdoms, some no more than a block apart.

“We the hood nobody knows about,” Far Rockaway native Eddie Bibbs told the Post. “Kids get in gangs here because there’s nothing else to do and it’s like being in a real-life video game. They get a rush from shooting.”

By July 20, Belton was back in police custody, this time in connection to three suspected gang shootings.

In the first, on June 20, shots were fired on Shorefront Parkway in Far Rockaway. Nobody was hit but lead flew through windows of two nearby apartments. One bullet lodged in a kitchen cabinet, according to a law enforcement source. Investigators believe warring gangs were fighting with each other. 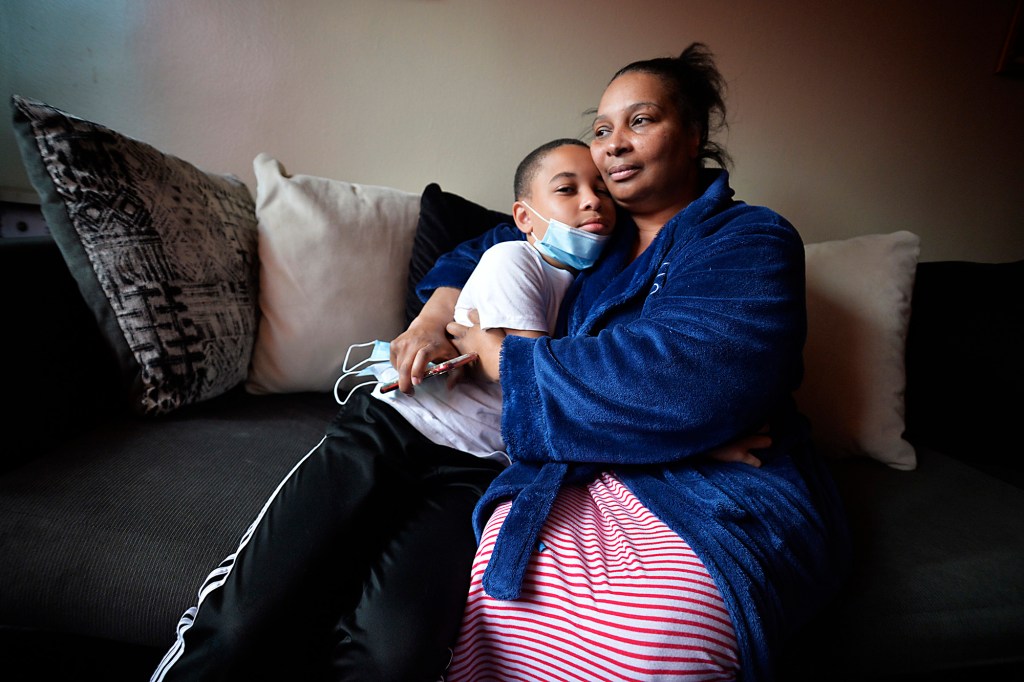 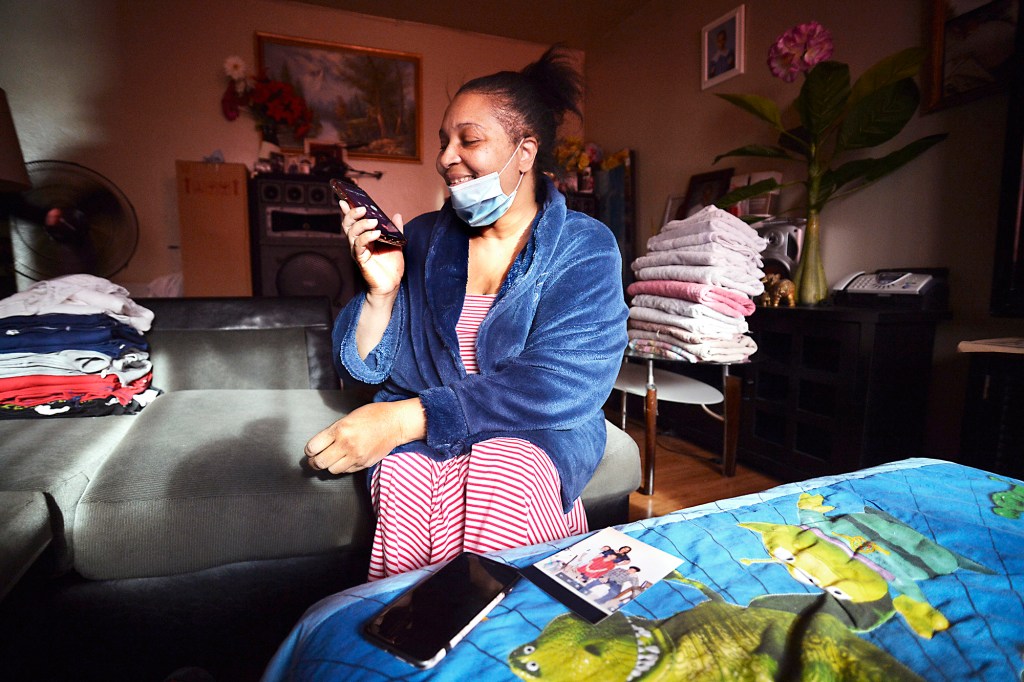 Lillie Reynolds talking to her son Micah in the phone.

A July 13 shooting followed on Beach Channel Drive, where a man told police that someone fired in his direction and ran away.

A week later, in the early morning hours of July 20 at a housing project on Beach 58th Street, a black sedan pulled up to the building and a gunman began shooting, a law enforcement source said. One woman told police bullets had gone through the windshield of her car and hit the dashboard. A building generator was also struck.

Later that day Belton was picked up and charged with three counts of 2nd-degree attempted murder, weapon possession, reckless endangerment and attempted assault.

Because he had turned 18 and was finally eligible for Rikers, Belton was sent to jail, where he remains while awaiting the results of the grand jury meeting this month.

Belton called collect from that jail while The Post interviewed his mother in the living room of their crowded apartment last week. Mom Lillie even handed the phone to the reporter.

He said he regrets winding up in jail. “I hope to find a way out,” he said.

Belton, who has a girlfriend who is four months pregnant, admitted to being a Blood, but said it is really “more a family than a gang.”

When asked if he and the gang do much shooting, Belton chuckled and said, “You could say that.”

But he added that he was not a bad guy and that police are lying about him. “I have to protect myself,” he said. “They come shooting at you, otherwise.”

In a video interview a week later from Rikers with The Post, Belton denied his crimes and said he “was set up.” He even made the claim that his Bloods SOS set was really named “Save our Society.”

“He’s a nice young man,” Martone told the Post. “He’s a tremendous leader. He always has a flock of people following him. He had a perfect record from the last program he was in.”

Sgt. Cummings says the new criminal justice reforms that allow Belton and others like him to skip hard time don’t serve the city.

“Criminals feel they can just walk around and laugh at law enforcement,” she said. “In turn the people who live in these areas are being terrorized. The criminal justice system wanted to unlock the jail doors and give people second and third chances, but in so doing we’ve imprisoned our own citizens.”

Martone defended Judge Gerald’s decisions, pointing to how she has “turned lives around. “I can’t say enough good about her. She put Micah in Bronx Connect in lieu of jail to see if he could prove himself. Cops can always highlight a case like this one and you won’t know about the successful ones.”

Back in Far Rockaway, Lillie Reynolds anxiously awaits her son’s legal fate. She wishes he were home, but said anything is better than having him back outside in a gang and winding up dead.