The country’s lone Native American on federal death row — convicted of killing a woman and her 9-year-old granddaughter — was executed in Indiana as the girl’s father watched him take his final breaths.

Lezmond Mitchell, a 38-year-old Navajo man convicted in the 2001 slayings of 63-year-old Alyce Slim and 9-year-old Tiffany Lee during a carjacking in Arizona, was pronounced dead at 6:29 p.m. Wednesday after receiving a lethal injection at a federal prison in Terre Haute, Indiana.

“No, I’m good,” Mitchell said when asked if he had any last words, according to an Indianapolis Star reporter who witnessed the execution, which took place despite the “steadfast objection” of the Navajo Nation and pleas for clemency from Navajo leaders, Mitchell’s attorneys said.

Lee’s father, Daniel Lee, was among the witnesses who saw the execution and prepared a statement that was read by an attorney, thanking the Navajo Nation Police Department as well as US Attorney General William Barr and President Donald Trump for their help in the case.

“I have waited 19 years to get justice for my daughter, Tiffany,” an attorney for Lee said on his behalf. “I will never get Tiffany back, but I hope that this will bring some closure.”

Lee’s statement continued: “If it had not been for the Trump administration, I do not think I would have ever received justice or a sense of finality.”

Mitchell’s attorneys, meanwhile, said the execution marked “another chapter” in a long history of injustices against Native Americans, claiming it represented a “gross insult” to the sovereignty of the Navajo Nation, whose leaders called on Trump to commute Mitchell’s sentence to life with the possibility of release.

“The very fact that he faced execution despite the tribe’s opposition to a death sentence for him reflected the government’s disdain for tribal sovereignty,” Mitchell’s attorneys, Jonathan Aminoff and Celeste Bacchi, said in a statement. 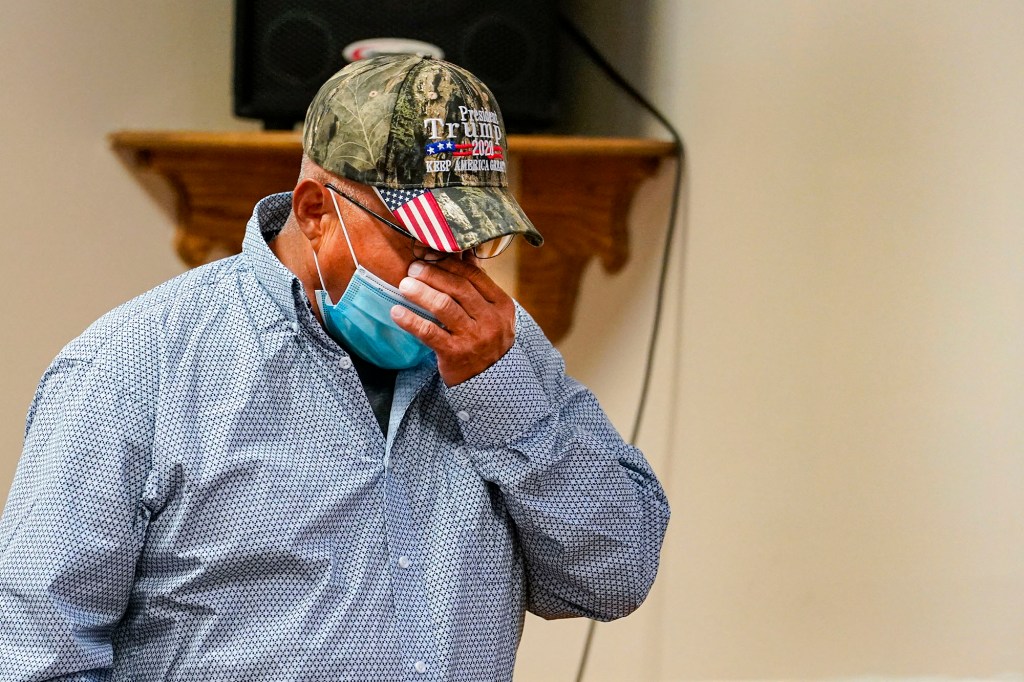 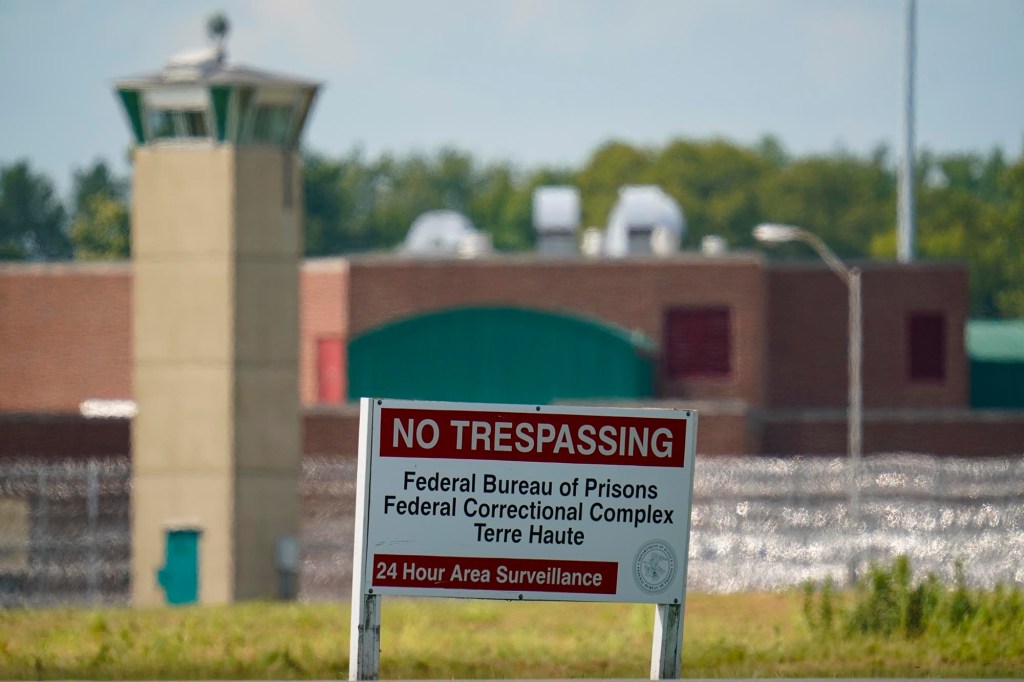 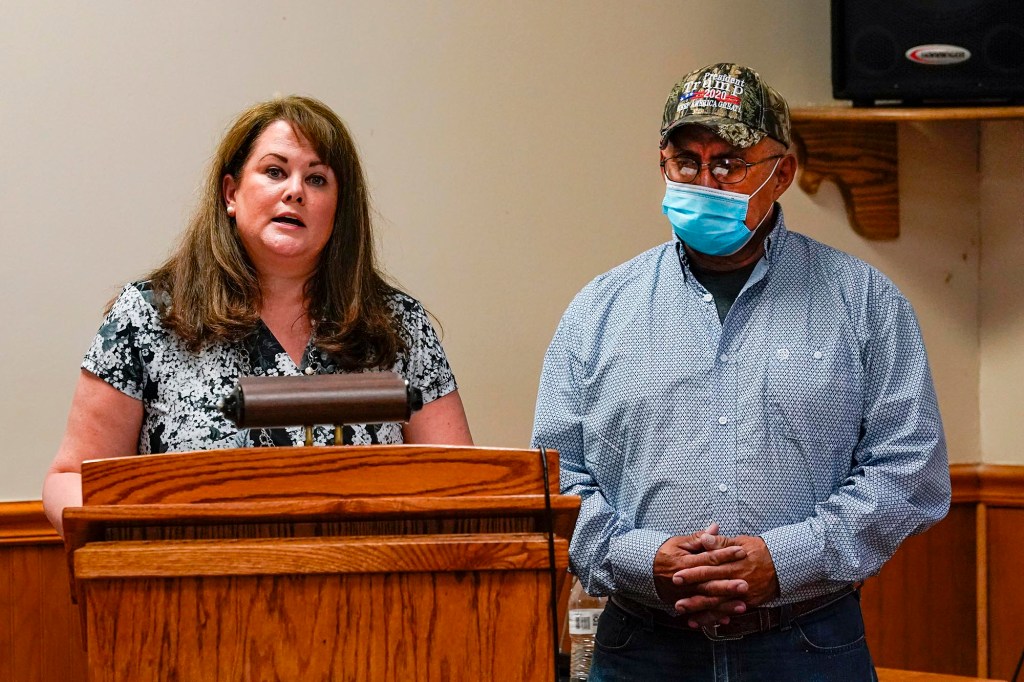 A former sheriff’s deputy in California allegedly beat a looter…

Mitchell was put to death after the Supreme Court refused to allow them to interview his jurors of 11 white people and a single Navajo about whether racial bias impacted their decision to recommend the death penalty, Aminoff and Bacchi said.

“Yet we have little doubt that it did, because in their zealous pursuit of a death sentence for Mr. Mitchell, the federal prosecutors made arguments laced with anti-Indian stereotypes,” the attorneys said.

Mitchell and an accomplice stabbed Slim 33 times and tossed her body into the backseat of her car beside her granddaughter after getting a ride from Slim in her pickup truck, federal prosecutors said.

He then drove the truck up to 40 miles away and ordered the girl to “lay down and die” before slitting her throat and crushing her head with rocks. Mitchell and his accomplice then cut the head and hands off the victims’ bodies and burned their clothes, according to the US government.

Mitchell has said his accomplice, Johnny Orsinger, took the lead in the killings. A minor at the time, Orsinger later pleaded guilty in the slayings and was sentenced to life in prison.

“Nearly 19 years after Lezmond Mitchell brutally ended the lives of two people, destroying the lives of many others, justice finally has been served,” Department of Justice Spokesperson Kerri Kupec said in a statement. 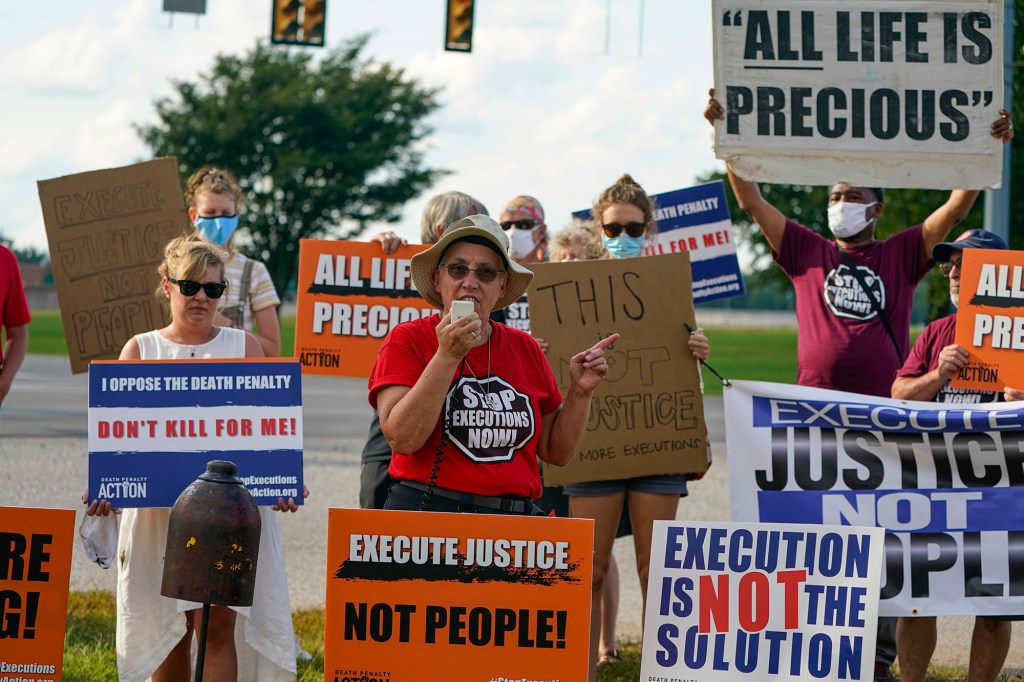 Barbara Battista speaks to the crows of death penalty protestors gathered across the street from the federal prison complex in Terre Haute, Indiana. 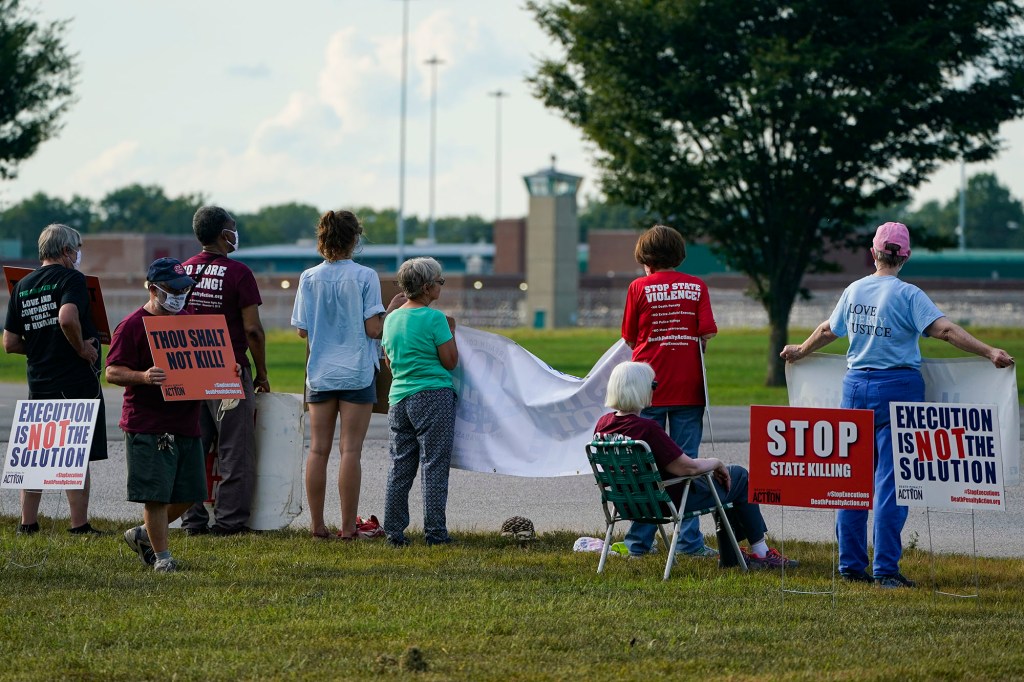 Anti-death penalty protesters gather across the street from the federal prison complex in Terre Haute, Indiana.

A former sheriff’s deputy in California allegedly beat a looter…

“In attendance at the execution this evening were representatives of the victims’ families as well as the father of the nine-year-old girl that Mitchell murdered.  Those family members, who are members of the Navajo Nation, have stated on the record that they supported implementation of the sentence returned by the jury and imposed by the court for Mitchell’s horrific federal crimes.”