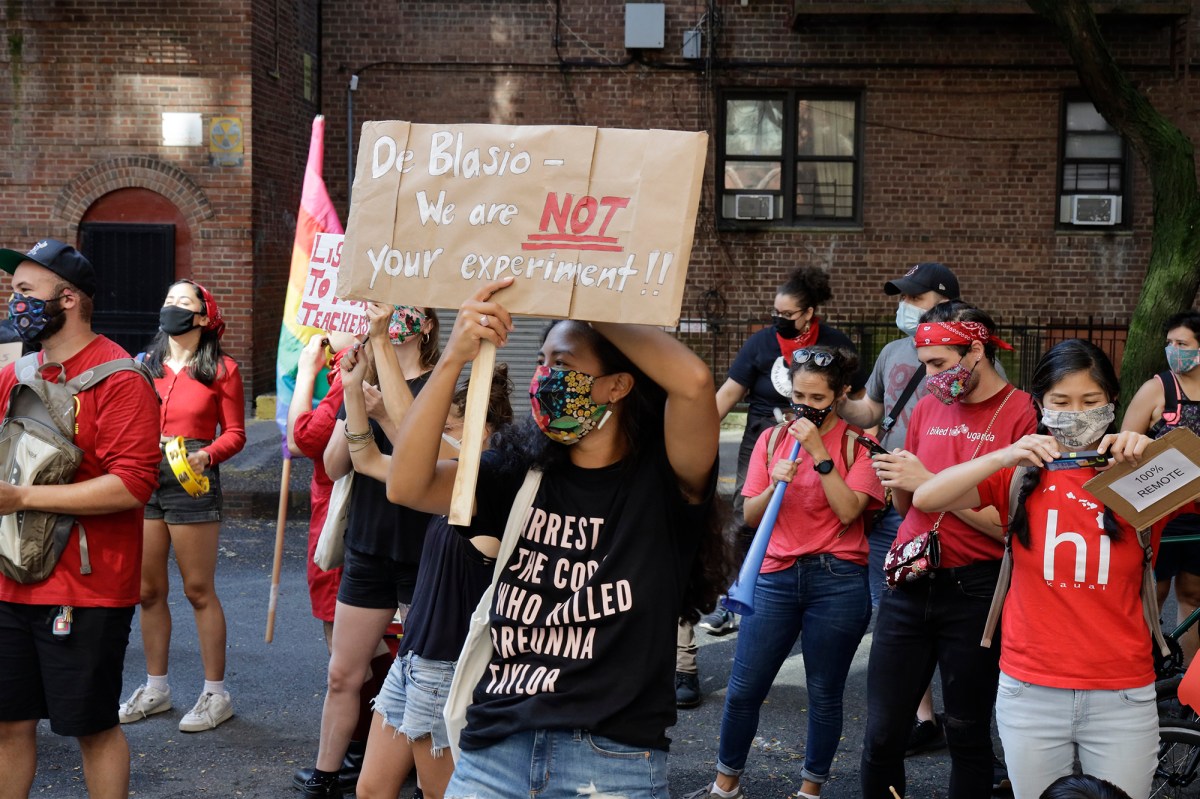 The group argued that a recent deal struck between United Federation of Teachers president Michael Mulgrew and City Hall was insufficient and failed to safeguard teacher health.

“We chose to continue these actions because we felt the deal reached by Mulgrew and de Blasio was inadequate to address the safety of our school workers and students,” said Flynn Murray, an organizer with the New York City School Workers Solidarity Campaign.

“Randomized testing of 10 to 20 percent of teachers and students once a month will not curb the spread of COVID.”

The teachers massed outside a Park Slope rental townhome owned by de Blasio at roughly 8:30 a.m., blowing and banging on instruments while shouting their opposition to a resumption of building activity on Sept. 21.

Flanked by NYPD cops, they then marched to Carranza’s Prospect Lefferts Gardens apartment building for the second time in three weeks.

“We’re going to f— his shit up by making mad noise,” said one speaker said through a megaphone. “We’re going to keep disturbing the peace until they give us a piece.”

A brass band that accompanied the protesters then started playing their instruments as building residents peered out their windows.

Teacher Jia Lee said she was disappointed by her union’s performance during negotiations with the city.

“We were thinking that there would be a plan in place that would assure us that our buildings would be safe,” she told The Post. “But somehow all of the things that we wanted were not in place. We are understaffed, we are under-resourced.”

Other educators said they felt their lives would be in imminent danger if they returned to their classrooms.

Some have demanded that schools remain fully remote until the city has no new coronavirus cases for 14 successive days.

In the face of union resistance, de Blasio has backed a partial reopening of schools, arguing that city kids have been subjected to damaging upheaval during the coronavirus crisis and would benefit from the return of some classroom activity.

Roughly 63 percent of city parents have opted to have their children return to school facilities as of Friday, according to the DOE.

Hizzoner has also noted that working city parents are in need of scheduling relief and that remote learning is inferior to in-person instruction.

De Blasio has stressed low infection rates and other positive COVID-19 indicators in pressing for the plan.

Mulgrew and de Blasio reached an 11th-hour accord this week that included a reopening delay and random monthly testing of students and teachers to monitor potential COVID-19 outbreaks.

“We’re all fighting for the same thing: a safe and successful school reopening,” said DOE spokesperson Miranda Barbot. “We’ll continue to do the hard work of making that happen.”

While teacher reaction to the deal has been mixed, several vocal factions have vowed to ratchet up their opposition.

Objectors have highlighted that the random testing program is not slated to begin until weeks after teachers are expected back in their buildings.

Roughly 15 percent of city educators have applied for coronavirus medical exemptions, according to the DOE.

Friday’s throng planned to resume their campaign outside DOE headquarters later in the afternoon.