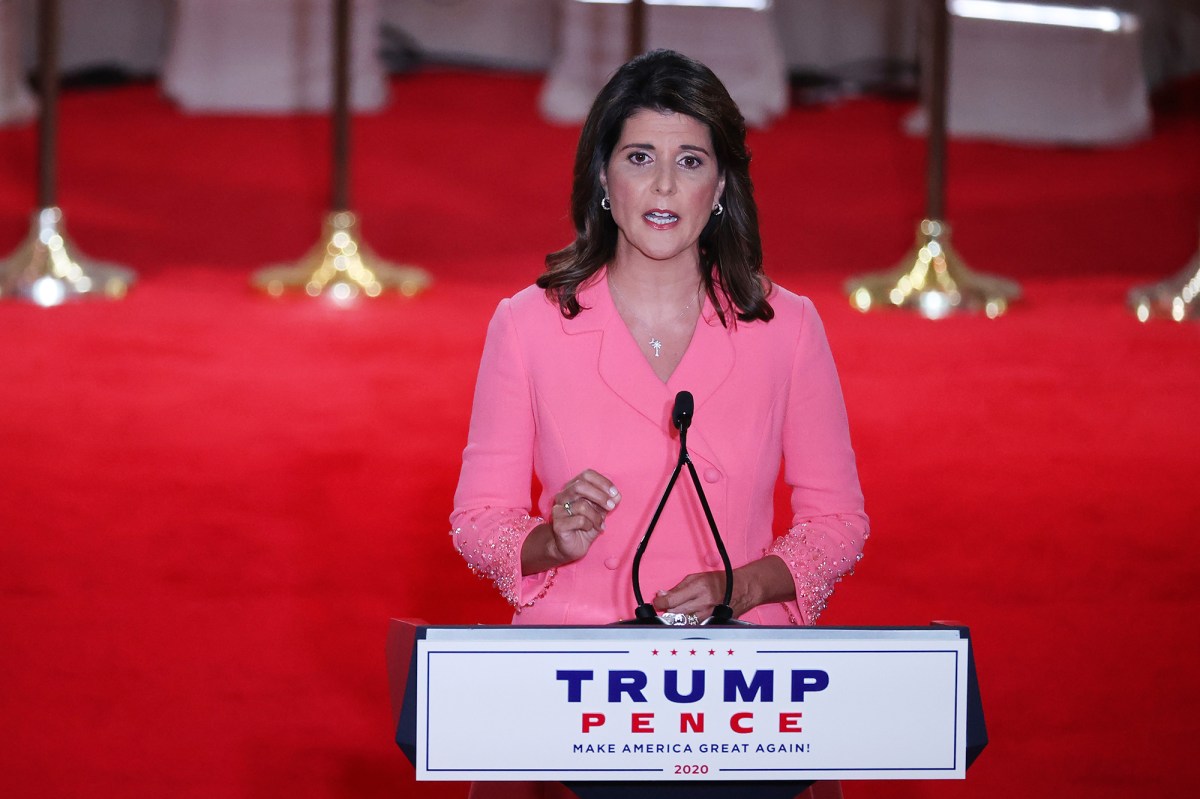 Former US Ambassador to the United Nations Nikki Haley touted President Trump as the man to lead America on the international stage — while claiming that challenger Joe Biden would pal around with China while sowing “socialism” at home.

“The UN is not for the faint of heart,” she said. “It’s a place where dictators, murderers and thieves denounce America and then put their hands out and demand that we pay their bills.

“Well, President Trump put an end to all of that. With his leadership, we did what Barack Obama and Joe Biden refused to do. We stood up for America.”

Haley cited as example the Trump administration’s crackdowns on North Korea and Iran, and strengthening of ties with Israel.

She cast Biden as the polar opposite.

Haley claimed that Biden would turn in similar results at home.

Compared to the Obama-Biden administration, “A Biden-[Kamala] Harris administration would be much, much worse. Last time, Joe’s boss was Obama. This time it would be [Nancy] Pelosi, [Bernie] Sanders and the Squad.

“Their vision for America is socialism,” Haley claimed. “They want to tell Americans how to live and what to think.”

Haley also spoke out against “political correctness and cancel culture.

“In much of the Democratic Party, it’s now fashionable to say that America is racist. That is a lie,” said Haley, the daughter of Indian immigrants. “America is not a racist country.”

“This is personal for me. I am the proud daughter of Indian immigrants. They came to America and settled in a small southern town. My father wore a turban. My mother wore a sari. I was a brown girl in a black and white world.

“We faced discrimination and hardship. But my parents never gave in to grievance and hate. My mom built a successful business. My dad taught 30 years at a historically black college. And the people of South Carolina chose me as their first minority and first female governor.” Haley said.

“America is a story that’s a work in progress. Now is the time to build on that progress, and make America even freer, fairer, and better for everyone. That’s why it’s tragic to see so much of the Democratic Party turn a blind eye toward riots and rage.

“The American people know we can do better. And of course we know that every single black life is valuable.

Haley is frequently mentioned as a serious 2024 presidential contender.

Haley’s name was also touted as someone who could replace Mike Pence as Trump’s running mate given her popularity, but such a move never eventuated and Pence on Monday was nominated as the party’s VP for a second time.

The mom-of-two served as the GOP governor of South Carolina for six years before Trump named her as his ambassador to the UN in early 2017.

But she voluntarily stepped down from that role in Dec. 2018 in a move that stunned Washington, telling reporters she wanted to take a break, and later joined the board of Boeing.

She promised to have Trump’s back and campaign for him ahead of the November election but in an interview last year left the door open for her own presidential run when pressed on her own White House ambitions.

“A year is a lifetime in politics,” Haley told Fox News’ Dana Perino. “It would be a waste of time to think about 2024 at this point.”

But she added, “Instead I want to do everything I do really well now and just see if doors open.”