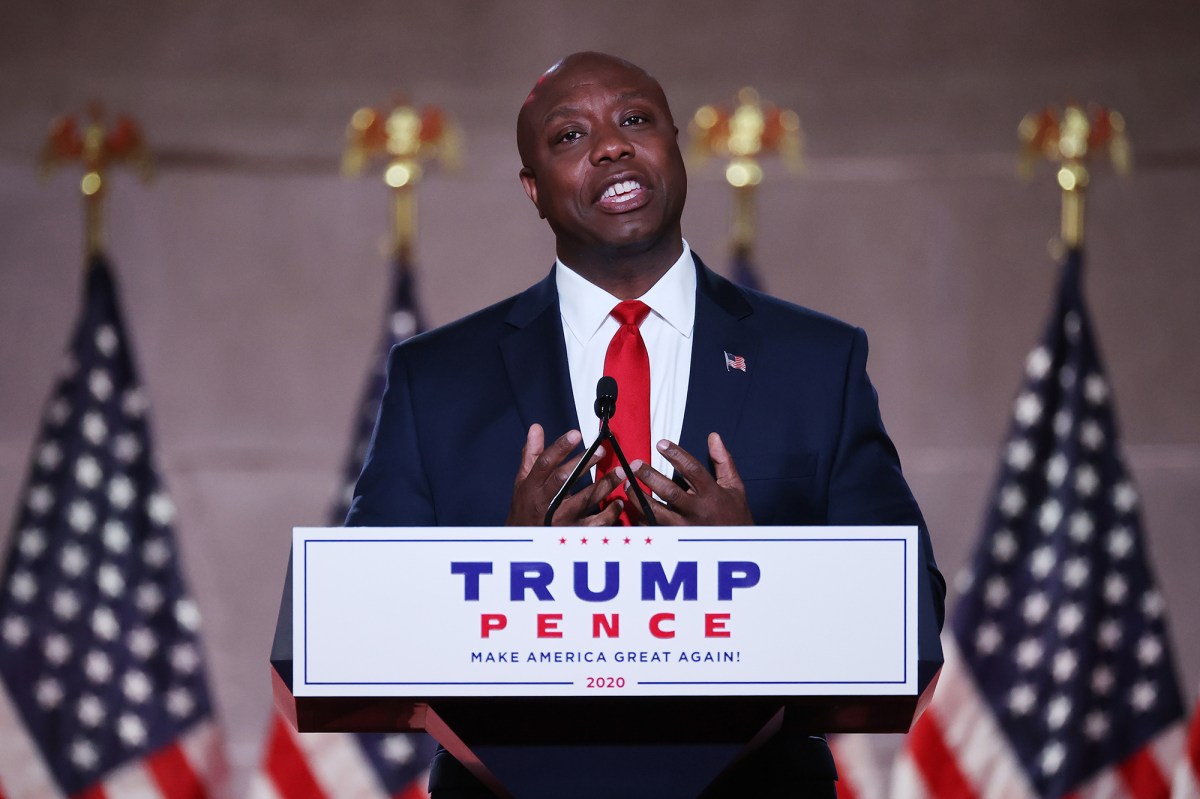 Congress’ only black GOP senator, Tim Scott of South Carolina, praised President Trump for making “tremendous progress” in achieving equality for all Americans as he closed out Monday’s first night of the 2020 Republican National Convention.

The lawmaker, a close ally to Trump on Capitol Hill, drew from his own family history to offer an optimistic vision of the nation — as he bashed Joe Biden’s record and accused the Democratic nominee of taking black support for granted.

“My grandfather’s 99th birthday would have been tomorrow. Growing up, he had to cross the street if a white person was coming. He suffered the indignity of being forced out of school as a third grader to pick cotton, and never learned to read or write,” said Scott.

“Yet, he lived to see his grandson become the first African American to be elected to both the United States House and Senate.

“Our family went from cotton to Congress in one lifetime,” Scott said. “And that’s why I believe the next American century can be better than the last.

“We have work to do… but I believe in the goodness of America… the promise that all men, and all women, are created equal.”

In Trump’s first four years in office, “we have made tremendous progress towards that promise,” Scott said.

Scott, 54, speaks frequently about being raised poor by a single mother, and has become an influential member of the GOP since arriving in Washington in 2011.

He’s a major point-person for the Trump administration on criminal justice reform and his name is frequently floated as someone on the list of prominent Republicans harboring 2024 presidential ambitions.

During Monday’s address, he blasted Biden’s over the 1994 crime bill that became one of the key contributors to mass incarceration.

He also brought up the former vice president’s now-infamous gaffe in May that black voters torn between voting for him and Trump “ain’t black.”

“When it comes to what Joe Biden says he’ll do… Look at his actions. Look at his policies. Look at what he already did and did not do while he’s been in Washington for 47 years,” Scott said.

“Our side is working on policy — while Joe Biden’s radical Democrats are trying to permanently transform what it means to be an American.”

“From a global pandemic, to the deaths of George Floyd and Breonna Taylor, 2020 has tested our nation in ways we haven’t seen for decades,” Scott began.

“But regardless of the challenges presented to us…every four years…Americans come together to vote…To share stories of what makes our nation strong, and the lessons we have learned that can strengthen it further for our children and grandchildren.”

While Scott is a high-profile supporter of the president, he’s also unafraid to call him out — recently telling CNN that the president needed to take down an “offensive” tweet where on supporter could be heard yelling the phrase “white power.”