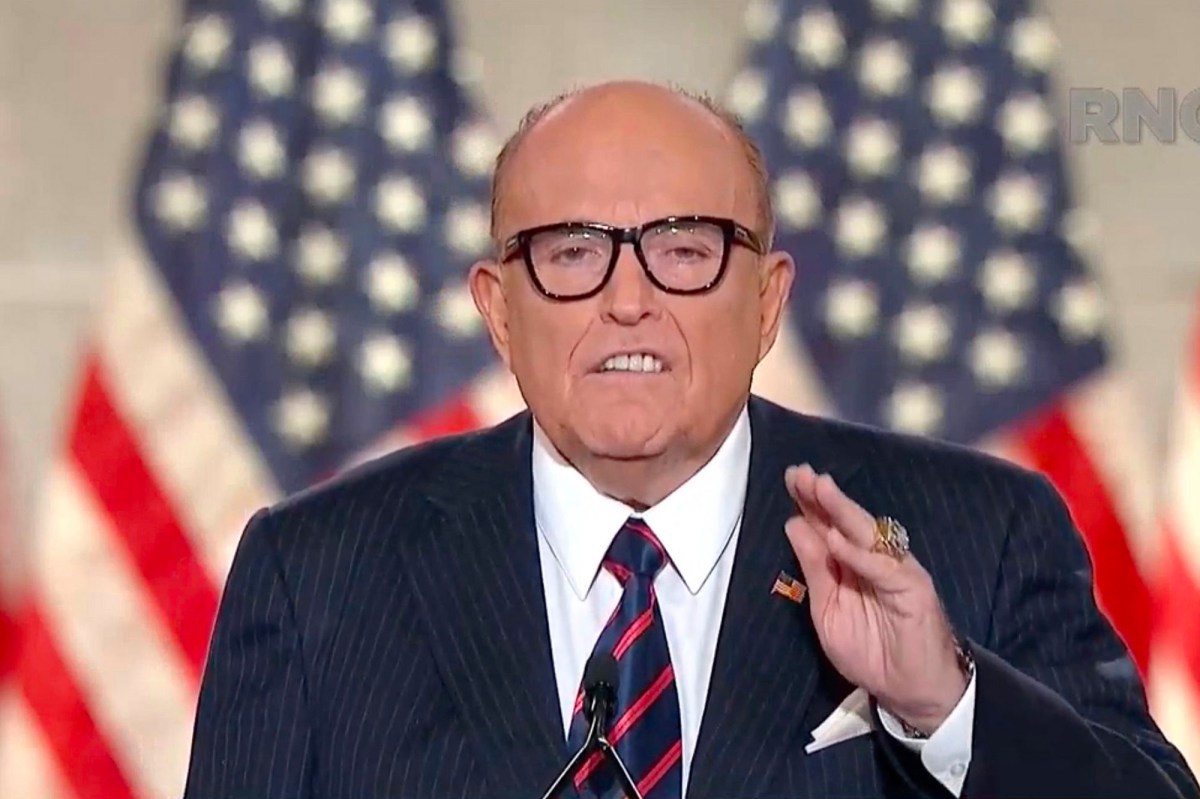 “It is clear that a vote for Biden and the Democrats creates the risk that you will bring this lawlessness to your city, town or suburb,” Giuliani said in a speech at the Republican National Convention.

“There is no question that this awesome job of restoring safety for our people cannot be done from your basement, Joe,” he said.

The former mayor, 76, is credited with cleaning up New York with “broken windows” policing and he blamed rising violent crime on Democratic mayors, including New York’s de Blasio.

“We’re seeing the return of rioting and looting. During riots this Democrat mayor, like others, has often prevented the police from making arrests. And even when arrests are made, liberal progressive DAs released the rioters so as not to disrupt the rioting,” he said, referring to de Blasio.

“New Yorkers wonder, how did we get overwhelmed by crime so quickly and decline so fast? Don’t let Democrats do to America what they have done to New York.”

Giuliani said Trump’s reelection would halt rioting, and Biden would worsen it.

“Biden has changed his principles so often, he no longer has any principles,” he said. “He’s a trojan horse with Bernie, AOC, Pelosi, Black Lives Matter and his party’s entire left wing just waiting to execute their pro-criminal, anti-police socialist policies.”

Giuliani gained national fame in the 1980s as the organized crime-busting US attorney in Manhattan, convicting the leaders of the “Five Families” of the Italian American mafia. He became known as “America’s mayor” for his leadership in the days after the 9/11 terror attacks.

As Trump’s personal lawyer, he emerged as a fixture in allegations against Biden.

Giuliani visited Ukraine in a quest to investigate Biden and his son Hunter Biden. The former vice president oversaw the Obama administration’s Ukraine policy while his son Hunter Biden earned $83,333 monthly on the board of the energy company Burisma, despite no relevant industry experience. Giuliani sought to link Biden’s public boasts of forcing the firing of a Ukrainian prosecutor — in exchange for $1 billion in US loan guarantees — to an investigation of Hunter Biden’s employer.

Democrats impeached Trump in December after he requested that Ukraine investigate the Bidens and the whereabouts of a hacked Democratic National Committee computer server. Two of Giuliani’s Soviet-born associates, Lev Parnas and Igor Fruman, were charged with illegally funneling foreign money to Republican causes. Parnas later turned against Trump.

Giuliani has been an influence on Trump during a spike in violent crime and national unrest over the May killing of George Floyd by Minnesota police.

The former mayor visited the White House last month and told reporters that Black Lives Matter is a “Marxist organization” that was “planning to destroy the police for three years.”

Trump said in an Oval Office interview this month that New York City needs “another Rudy” to enter the mayor’s race next year as violent crime soars.

“He did stop and frisk and he was proud of it. He wasn’t somebody that apologized at all. He did his job,” Trump told The Post. “It was bad when he was there. I think it is maybe at that same level if not worse. It can be it can be saved but they’ve got to work fast.”