President Trump on Friday pardoned Alice Johnson, the woman sentenced to life in prison before being freed by Trump in 2018, hours after she praised his compassion in an emotional speech on the final night of the 2020 Republican National Convention.

“I’m so proud of you and we’re giving Alice a full pardon,” Trump said in the Oval Office. “That’s the ultimate thing that can happen. That means you can do whatever you want in life, and just keep doing the great job you’re doing.”

Johnson, 65, wiped tears from her eyes but did not speak to reporters at the unscheduled event.

“Alice has done an incredible job since she’s been out and recommending other people,” Trump said.

“We said, how many people are there like you? There’s only one Alice, as far as I’m concerned. But how many people are like you or your circumstance, where they were given a massive sentence and they’re good people, great people? And she said, ‘So many. They’re in jail. So many.’ And she’s looking for those people. And she’s recommending those people. We’ve already done some… and they’ve done really well since they’ve been out.”

In 1997, Johnson was sentenced to life in prison with no parole as a first-time, non-violent offender for her role in a large cocaine-dealing ring.

“I was once told that the only way I would be reunited with my family as a corpse,” Johnson said Thursday at the RNC.

“But through the grace of God and the love and compassion of President Donald John Trump, I stand before you tonight and I assure you, I am not a ghost. I am alive, I am whole and most importantly, I am free.”

She spent 22 years in jail and unsuccessfully appealed the Obama-Biden administration to commute her sentence before reality TV star Kim Kardashian became interested in her case.

Kardashian lobbied Trump to free Johnson and in 2018, he officially commuted her sentence.

“When President Trump heard about me and the injustice of my story, he saw me as a person. He had compassion,” she said at the RNC.

Trump spoke about Johnson in his 2019 State of the Union address, saying he had been “deeply moved” by her story and described her as a “terrific woman.”

Johnson was only sentenced to life because of a 1986 drug act co-authored by Democratic presidential nominee Joe Biden, which drastically increased cocaine sentencing guidelines.

The mom-of-six has now become a criminal justice advocate and the face of the Trump administration’s criminal reforms.

Trump advisers, and even some opponents, say he could boost support among minorities by talking about criminal justice reform, including his role in passing the 2018 First Step Act, which implemented various prison reforms and sentencing reductions and expanded compassionate release.

Clemency advocates have cheered Trump’s sporadic prison commutations and pardons, but hope for even more aggressive uses of his presidential powers before he leaves office.

After winning Johnson‘s freedom, Kardashian made a second visit to the Oval Office in late 2018 to plead for Chris Young, then 30 years old, who was arrested at 22 for drug dealing and sentenced to life as a habitual offender. 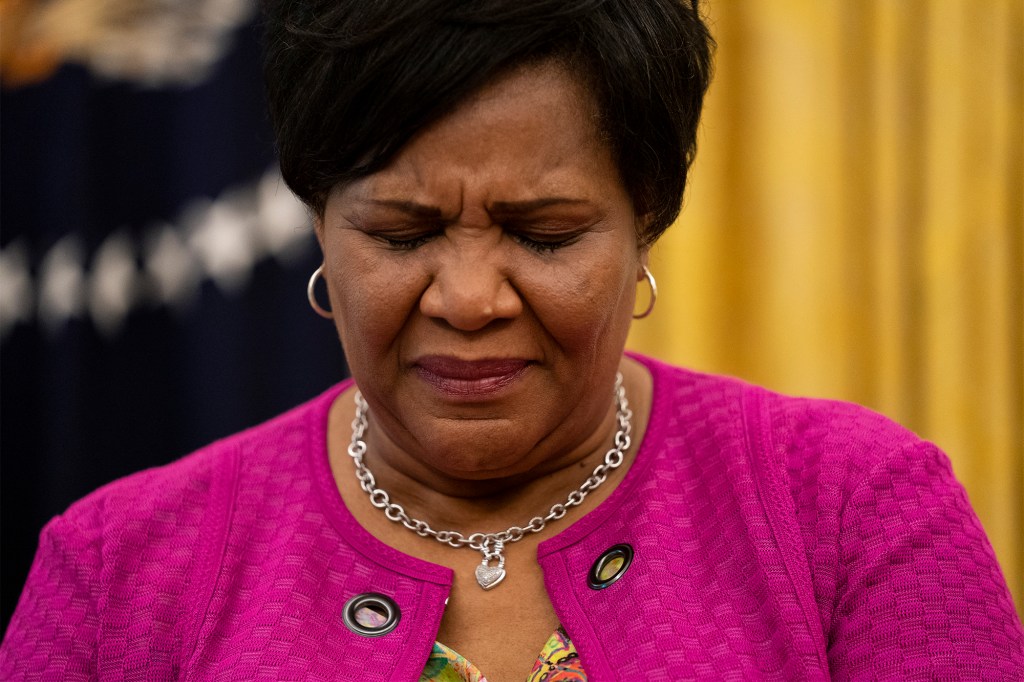 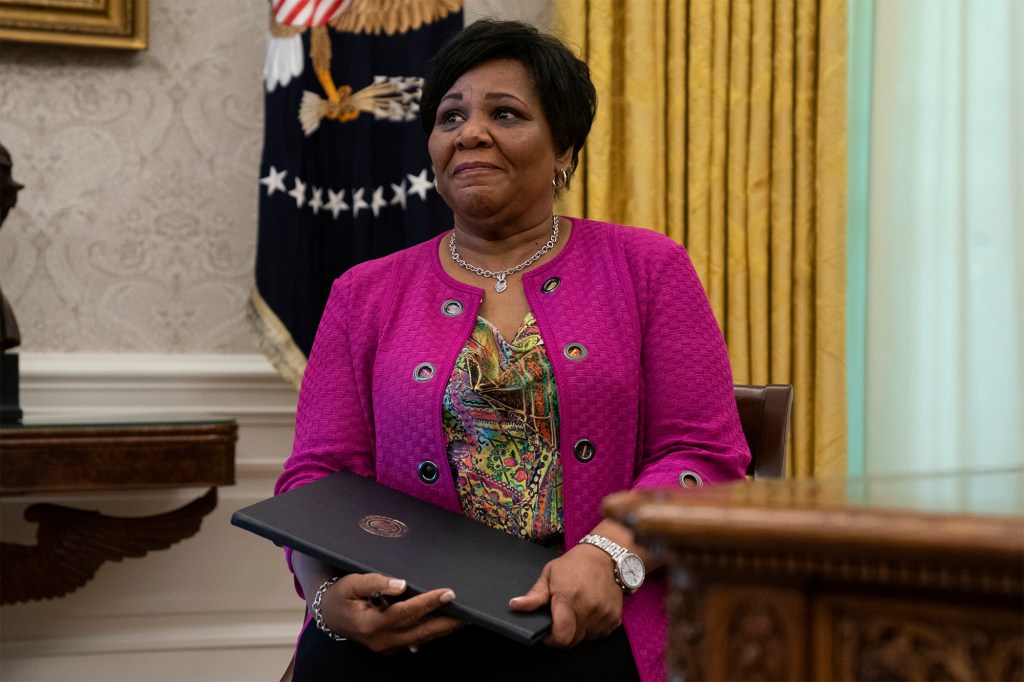 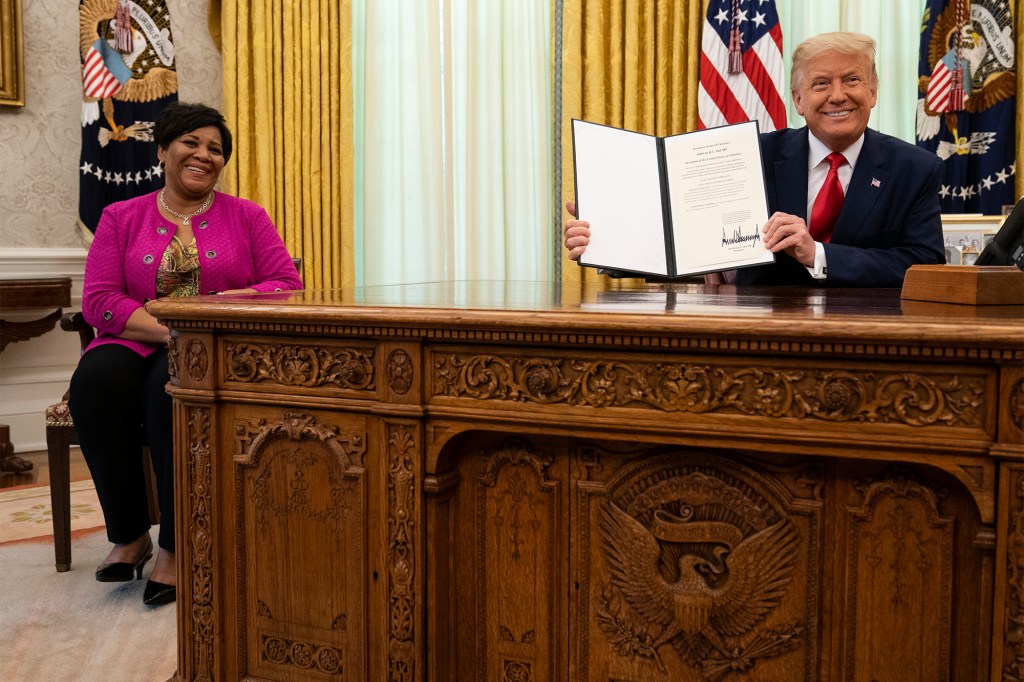 President Donald Trump and Alice Johnson smile after Trump signed a full pardon for her today.

The tuft of hair was “clipped from the President’s left…

Young received a life sentence due to the “three strikes” provision in another Biden-authored law, the 1994 crime bill, because he had two prior felony convictions.

Kardashian brought former US District Judge Kevin Sharp to the Oval Office. He told Trump that as a judge his hands were tied and the penalty was unjust. Two years later, Young remains in prison.

The Trump-signed First Step Act eases the federal three strikes rule. Now, a third serious felony results in a mandatory 25 year sentence. But the change was not retroactive.

Trump faces a delicate balancing act pumping criminal justice reform while also pushing a “law and order” message, specifically in regard to recent violent protests following the Minnesota police killing of George Floyd in May.