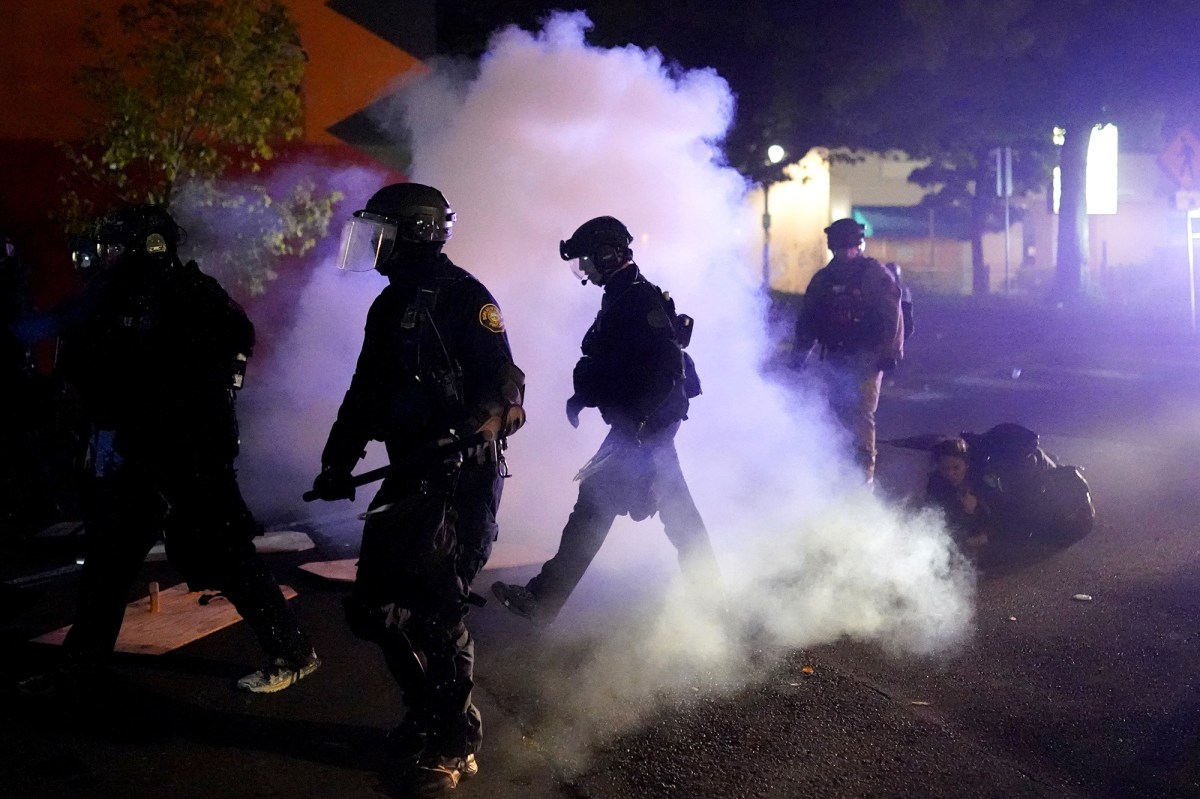 President Trump said Saturday that he was prepared to once again send in National Guard troops to cities if asked, following the 86th consecutive night of chaos in Portland, Oregon.

“Another bad night of Rioting in Portland, Oregon. A small number of Federal troops there to protect courthouse and other Federal property only (great job!),” Trump tweeted Saturday morning. “Wanting to be asked by City & State to STOP THE RIOTS. Would bring in National Guard, end problem immediately. ASK!”

Protests were so violent in downtown Portland last night that cops declared it a riot early Saturday.

The crowd of roughly 100 threw glass bottles, broke windows in patrol cars and pointed lasers outside a precinct Friday night before police decided to move in, The Associated Press reported.

Police also reported that balloons filled with feces were spotted being pelted at cars.

Officers used smoke to break up the group and detained several of the rioters, the AP reported, citing local news outlets and videos posted online. It wasn’t clear whether anyone was arrested.

On Friday, rioters threw rocks and glass bottles at federal agents outside a US Immigration and Customs Enforcement building that they had sprayed with graffiti, the AP reported.

The agents broke up the crowd with smoke or tear gas and used crowd control munitions. Three arrests were made.

Earlier in the day, the federal government closed several buildings citywide while the FBI investigated a car bomb threat.

The violence came just hours after the arrest of 25-year-old Marquise Love, who was collared for allegedly knocking a man unconscious during rioting last week. He is charged with felony counts of assault, coercion and riots, with bail set at $250,000 on the top count of assault.

Portland has long been a hotbed of left wing extremism, even before the Black Lives Matter protests which swept the nation after the death of George Floyd in Minneapolis. In July president Trump deployed troops to the city to protect federal property.

The decision was denounced by city Mayor Ted Wheelers and governor Kate Brown — both Democrats. Though most federal troops were eventually pulled out, Trump has consistently warned they can return at any time.

“Kate Brown, Governor of Oregon, isn’t doing her job,” Trump said at the time. “She must clear out, and in some cases arrest, the Anarchists & Agitators in Portland. If she can’t do it, the Federal Government will do it for her.”